Day of the Flowers Pre-Release Review 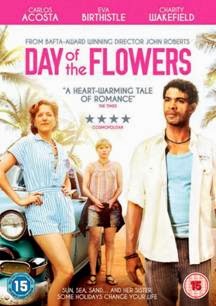 
Two young, strong-willed Scottish sisters, one a left-wing activist, the other a born-to-shop fashionista, take their late father's ashes to Cuba, the site of many intriguing family legends. Arriving in Havana, the two women promptly lose the ashes and go through a series of misadventures - both romantic and dangerous - to try to retrieve them, making some surprising discoveries along the way about the family ties that hold them together. Drenched in sunlight and with a fabulous Cuban soundtrack, DAY OF THE FLOWERS is a colourful and wryly humorous tale of cross-cultural misunderstandings and lost illusions which will lift spirits and make hearts soar.


As anyone who has a sister knows, they can sometimes be a blessing and a curse.  That's no different in this rather charming tale from the director of the 'War of the Buttons', John Roberts.

This movie seems to straddle the genres of romance, comedy and drama but does so in such a masterful way that it doesn't feel at all disjointed.  That's the mark of a good writer and director, which this movie has in spades.

With this sort of subtle and sometimes understated comedy, the whole story definitely lives and dies on the strength or weakness of it's cast and here, the characters are in very safe hands.  The strongest of these by far is that of Eva Birthistle as Rosa.  She manages to be complicated but at the same time completely endearing as the sister trying to take her fathers ashes to Cuba.  She has a fantastic companion in the shape of Charity Wakefield as Ailie.  They really seem to come across almost as if they really are sisters in their bickering and loving relationship.

The Cuban cast here are superbly chosen.  Especially in the form of the renowned dancer Carlos Acosta.  This is his first major acting role but from his performance here, he has a wonderfully self assured style that will hopefully lead to some more roles in the future.  The only thing wrong with his character is that I would have loved to have seen him dance a little more in the movie but that's  just a personal preference, although there is a great scene involving him and a student that really shows his skills off.

The setting of Cuba itself is used almost as if it were a character itself and while it comes across as a great advert to get people to want to visit on their holidays, at the same time it doesn't shy away from  showing the other side of life there too.

There are so many great things to recommend this movie but all I want to say is that it is an absolutely beautiful, well acted and intelligently written movie that manages to be funny, touching and massively heart warming without falling in to the trap of being so sweet that it will rot your teeth.

'Day of the Flowers' is released on DVD on March 10th.

Posted by Pat Scattergood at 14:35