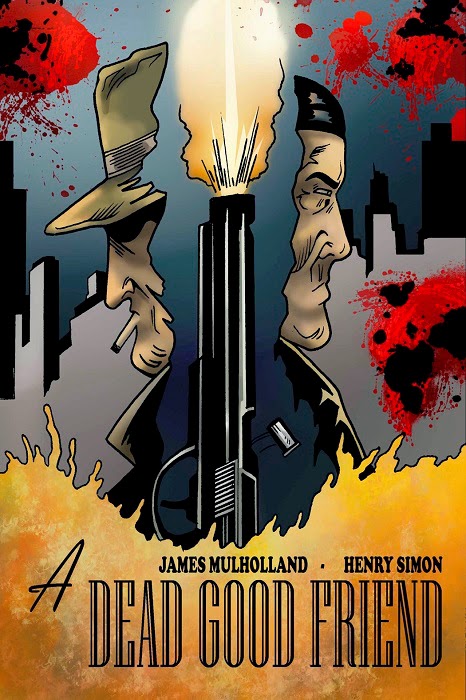 
A mob enforcer.  His best friend.  A job gone wrong.  Where will their paths go from here?


At six pages, I have to admit that I wasn't really all that sure that 'A Good Dead Friend' would be able to make much of an impact at all.  I mean, what could possibly happen in six pages that could make a reader want to pick  it straight up and read it all over again.

Well, in this case, not a lot but a lot at the same time.  You may read this one and wonder just what I am talking about so let me explain.

If you were to just skim over this one then you would miss so much.  There's multiple layers here and despite the short length of the story, a lot to keep the reader hooked in until the end.  I also think that this story manages to do something amazing.  In the space of six pages, the writing here manages to cram much more in to this story than other writers manage to get in to an entire comic book.

James Mulholland is definitely a writer to keep an eye on if this web comic is anything to go by.  You don't get as much character work as some might hope but Mulholland does such a great job with the story that you wind up caring about the characters and the world that they inhabit.

Art wise, it's not perfect but at the same time it's not awful either.  There were a couple of panels that I would have liked to have seen a little bit more detail but it doesn't derail the story either.  That said, the art does do it's job.  One of the things that the art does do superbly well is in the color work and the panel placing etc.  They helped the story to feel a little bit cinematic, almost as if you could imagine this being set in a world of mobsters with someone like Edward G. Robinson in charge.

All in all, I'm not normally that big a fan of such short stories, or of web comics in general because I have read some truly awful ones, but this one is well worth sitting down and reading.  A great story, a near perfect pace and some really good panel work has definitely gone some way in to making me rethink my stance on web comics.

You can read 'A Dead Good Friend' here!
Posted by Pat Scattergood at 15:21