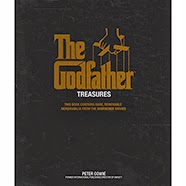 
The Godfather is one of the most famous films ever made, thrilling successive generations since it was first released in 1972.  Francis Ford Coppola's adaptation of Mario Puzo's novel of the Italian-American family embroiled in Mafia affairs achieved new levels of excellence in the history of film production and many snippets of dialogue have become iconic sayings.

The Godfather Treasures tells the story of how the film was made - how Coppola and Puzo set about turning the book in to a script; how the cast of actors headed by Marlon Brando, who would forever be associated with his role as Don Corleone, was assembled and how the vivid locations in New York and Sicily provided the most authentic backdrops to Coppola's inspired direction.

Celebrating the many aspects of the original creation - from the music to the costumes and cinematography - this highly illustrated book, which includes many rare behind-the-scenes photographs, explains how Coppola and his team brought the story to the screen and how the family's history continued in The Godfather Part II and Part III.

It provides the ultimate memento for any movie buff's collection with the inclusion of 15 facsimile documents selected from the Archives of Paramount Pictures, such as:
Review


I absolutely love the 'Godfather' trilogy.  In fact, I can honestly say that it's one of the few trilogies that I can watch again and again without getting bored of it.

One of the beautiful things about the three movies is that no matter how many times you have sat and watched them from beginning to end, you still wind up seeing something you didn't notice any of the other times.  You can't really say that about a lot of movies can you?

When I saw this book in a shop and saw just what kind of goodies would be included in the set, I knew right there and then that I had to buy it  so I did.  Much to my wife's chagrin, considering just how many books I have already.  You know what?  It was worth every single penny.

This book, written by Peter Cowie, is a veritable treasure trove of goodies and behind the scenes gems that will hook in fans of the movie and movie buffs in general.  Not a single piece of information is left untouched and that gives us a truly informative experience.  I can't tell you enough of just how much you will find to read and look at in this book.  The way it's written leaves no doubt that this was 100% a labor of love for Peter Cowie.  He gives the trilogy the level of respect that it deserves and when you add that to the memorabilia that comes with the book then you are seriously in for a treat.

All in all, this is one of the best movie making books that I have ever had the pleasure of reading.  Looking through all of the bits and pieces here was a bit like unwrapping birthday presents.  Maybe that's just the massive movie nerd in me talking but I would definitely class this as an essential purchase, especially if you love the movies.