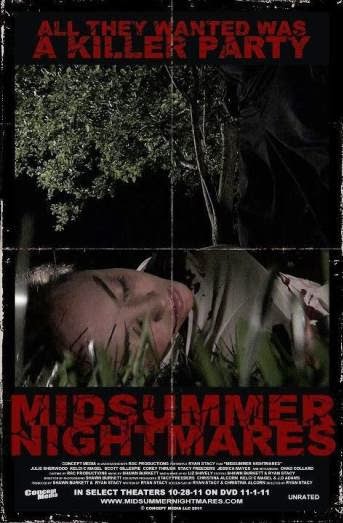 
It's always just a party- until somebody gets killed! Audrey Small (Julie Sherwood) and three of her closest friends are preparing to throw a costume party, Midsummer Nightmares, which everyone calls 'the social event of the season.

But there is someone in their midsts who would prefer to make this faux-bloodbath a real one.

Can Audrey and her friends survive this mad individual's evil plan? Or will they all, one by one, be picked off...?


As a fan of indie horror movies and slasher movies, I was really eager to kick back and watch this one armed only with a drink and a big bugger of a bowl of popcorn but would it live up to the hope that I set for the movie?

I'm not sure if it was intentional but with the glut of slasher movies coming out recently that hark back to the 1980's, the glory days of the slasher movie, 'Midsummer Nightmares' really has a feeling of being a low to mid budget 80's slasher.  I don't mean that in a bad way, far from it.  Slasher movies from the 80's always seemed to have a grimy charm to them.  That's quite evident here as well.

While the deaths aren't majorly inventive, they are quite well done.  It might not be a gore fest like the slashers of today but some of the deaths really looked good on the screen.  They had a bit of a weird mix of a nod to the 80's slasher death scenes and a knowing nod that comes from the post 'Scream' generation.

One of the things that did disappoint me was the dialogue in the movie.  The performances weren't awful by any stretch of the imagination but some of the dialogue felt quite stilted in places and there were also a few scenes where the lines just seemed really unneeded if I'm honest.  That was especially true with some of the scenes where two female characters were talking to one another.  It felt almost as if they were shouting instead of just talking and even when it did come across as a conversation, you didn't really learn anything about them or the story itself.

That said, that's the only thing that bugged me about the movie.  The performances aren't the best that Concept Media have had in a movie but at the same time, I've seen much worse in horror movies.  For the most part the characters were interesting but there were a couple that came across as quite unlikeable but the killer soon fixed that problem.

Other than the problem with there being some scenes with unneeded dialogue, the writing is actually well done and really shows a flair for choosing the right time for the reveals and the twists.  That alone raised the quality of  this above other indie horror movies that I have had the pleasure of seeing recently.

If you are an indie horror fan then you could definitely do a lot worse than getting to see this movie.  There are a few good death scenes here as well as some well done twists.  It's not the most original slasher movie I've ever seen but at the same time, there are some really awful ones out there so it was a nice change to get to see one that was put together well.