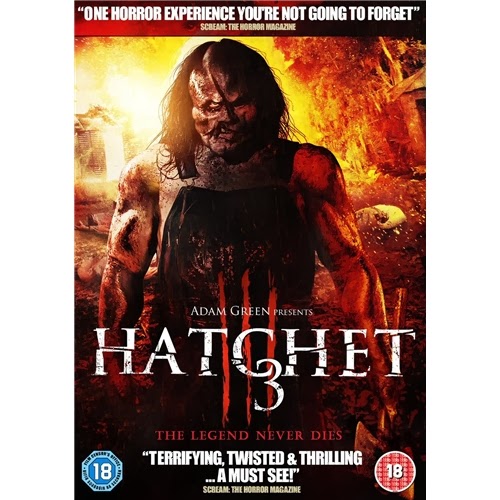 
A search and recovery team heads into the haunted swamp to pick up the pieces and Marybeth learns the secret to ending the voodoo curse that has left Victor Crowley haunting and terrorizing Honey Island Swamp for decades.


As a big fan of the first two 'Hatchet' movies, I couldn't wait to get my nerdy little hands on the third, and some say final, installment in the series.  The one worry I had was would it match up to the superb first two movies considering the director wasn't returning for part three?

Well, it lived up to the first two and then some.  By the looks of it, if the series does continue, Adam Green left it in some very safe directorial hands in the shape of BJ McDonnell.

One of the things that I liked was that while Adam Green handed over the directorial reins to McDonnell, he chose someone that had been been with  the series from the start and I liked that.  It meant that we didn't lose the things that made the first two movies so popular amongst us gorehounds out there and if there's one thing that this movie has in spades, it's gore by the bucketful.

If you have seen the first two movies at all then you most definitely know what to expect because this third installment has all of those things and more.  Dark comedic moments, gore, inventive deaths, some great and practical special effects and a great cast featuring a couple of horror legends.  What more could you want from a movie?

The story itself follows on directly from the second so if you haven't seen that one then you may be slightly lost at first.  However, don't worry too much about that as you will  get caught up pretty quickly.  One of the things about these movies that I like is that while they're not going to exactly tax your brain, you will most definitely be entertained.

One of the strengths of this movie is that the links to the first two in the series are really well explored and come in to play nicely throughout the movie itself.  Some more of the killers back story was revealed, there were some absolutely hilarious moments and, lets be honest here, there are tons of lines that you will be quoting long after the movie has ended.

The main thing that sets this movie apart from the massive surge of slasher movies out there is that through all the blood, guts and gore that fill up the movie, there's an underlying sense of fun to proceedings and I really like that.  Maybe it's my own twisted sense of humor but I was howling with laughter at some of the dialogue and scenes dotted throughout the movie.

Cast wise, there are some really fun performances here.  You have the massively intimidating Kane Hodder here as, yep you guessed it, the brutal killer that rips people apart.  You have Sean Whalen, yes Roach from 'People Under the Stairs', as a forensic officer and you always have Captain Spaulding, Sid Haig, himself as a racist hobo who bangs heads with one of the members of the police force in really un-PC way.

All in all, this is a superb movie.  You have a great cast, blood and gore to satisfy the gorehounds and some darkly comedic laughs to be had along the way.  If this is the movie that the series ends on then it's ended on a high and you can't say that about most horror trilogies can you?

Posted by Pat Scattergood at 14:23