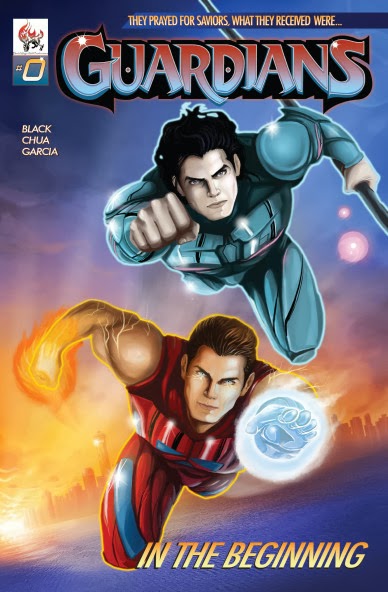 
Who are the Guardians?

Where did they come from?

Why are they here?

This 20 page prologue issue welcomes you to the world of Guardians and lets you know about them, about the city and about what's to come.


Both the big publishing world and the indie comic book world are absolutely jam packed full of superhero stories so when ever a new one pops up, I'm always a little dubious about getting excited.  A lot of them come across as massively cliched and uninspired.  Even boring.  Sometimes, just sometimes you get a title that gives you just enough to hook you in and get you excited about the rest of the series.

The question is however, where does issue 0 of 'Guardians' fit in?

After reading this prologue issue, I have to admit that 'Guardians' definitely falls in to the second category.

This release, written by Todd Black, is written in two parts.  The first tells some of the story of their arrival in the city and reveals some of their mission to protect the inhabitants.  You're told just enough to get you interested enough to want to see more of their story and to see who the mysterious man that appears at the end of the issue is and how he will come in to play.

The second part is told from the point of view of the Guardians themselves.  You get to see their insight in to their arrival, their emotions about how they'll made to feel by the inhabitants of the city and more.  I really liked that approach and it made a nice change to see a writer go for that path in a superhero story.  It's one of the things about this issue that really made it stand out for me as a reader.

Another part of the issue I liked were the science fiction undertones that ran through the story itself.  It blended perfectly with the superhero side of things and gave it a nice style of it's own.

Art wise, the work here is superb.  I really liked the detailing in the panels and how the characters, especially  that of the Guardians themselves, flew off the page.  I also liked the use of the bright colors to distinguish them against their surroundings.  It's the little touches such as that which really hooked me in.

All in all, this is a superb and well written introduction to the characters that will no doubt be main players in the 'Guardians' world.  You're told just enough to get hooked in to the story and their world.  I also really thought that telling the prologue in two parts was a brilliant writing decision and helped to raise the quality above the other indie superhero titles out there.

The team behind this title are definitely one to keep an eye on and I for one, will be getting the next issue to see just where the 'Guardians' are going to take us next.

To try 'Guardians'  Issue 0 for free here!
Posted by Pat Scattergood at 14:33