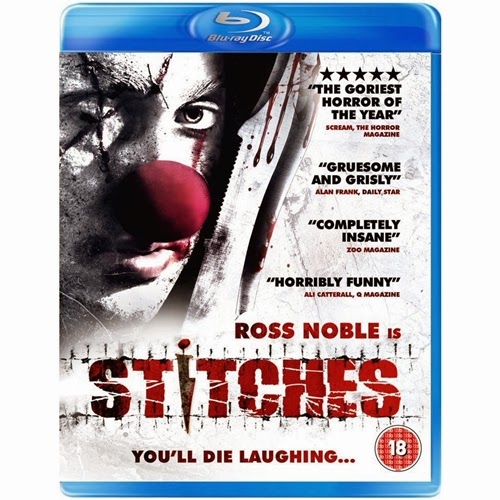 
Jaded Richard Grindle (Ross Noble) is the sleaziest clown working the children's party circuit in Ireland. Arriving late to one birthday, his timing is off, the bratty kids a nightmare and a prank goes horribly wrong - he falls on a kitchen knife and goes to that Big Top in the sky.

Years later the same nasty kids attend another more grown up bash. Little do they know, thanks to a black magic clown cult, Stitches will be the uninvited guest of honour seeking revenge on those responsible for his untimely death. Laughs and gore combine in this twisted tale of one very bad clown.


Ross Noble is one of the most off kilter and hyper energetic comedians that I have ever had the pleasure of seeing so when I heard that he was going to be in a horror movie playing a maniacal clown then I just had to give it a shot.

I must admit that when I started watching the movie, I was wondering just what on Earth I had put in to my player.

The best way to describe it is that if you have ever seen his stage show then you know exactly what to expect  from his performance.  His hyper manic personality is on full show here but with added gore and murder alongside the clown make up.  The way that he spits the puns and the one liners is absolutely hilarious and had me absolutely howling with laughter.  Add that to the massively over the top gore and death scenes and it all comes out as one hell of a thrill ride.

Writing wise, it's true that this follows the time tested rules of the slasher movies, the constant stream of puns and jokes told by the completely straight faced and dead pan Ross Noble make this a comedy horror like the later 'Nightmare on Elm Streets' and recent movies such as 'Slither'.

The cast are pretty much cannon fodder in the best possible way.  They do stick to their 'by the numbers' roles but their performances of the characters are much higher than I have seen in other such low to mid budget horror movies.  That said, this is definitely the Ross Noble show.  He completely dominates the movie and makes it memorable.  I would love to see him in more movies.  To be honest, I would love to see a sequel to this as well.

The special features aren't the best I've ever seen but considering the budget of the movie itself, what we do have here is really interesting.  The best is by far, the massively entertaining commentary between Ross Noble and the director Conor McMahon.  It sounds like they had a great amount of fun making the movie and some of the behind the scenes information is positively fascinating.  Some of the little anecdotes told by the pair had me in hysterics.

All in all, this movie went above and beyond my expectations.  The gore effects are well done and should definitely be taken tongue in cheek, just like the rest of the movie.  If you are a fan of Ross Noble's comedy then you will absolutely adore this.