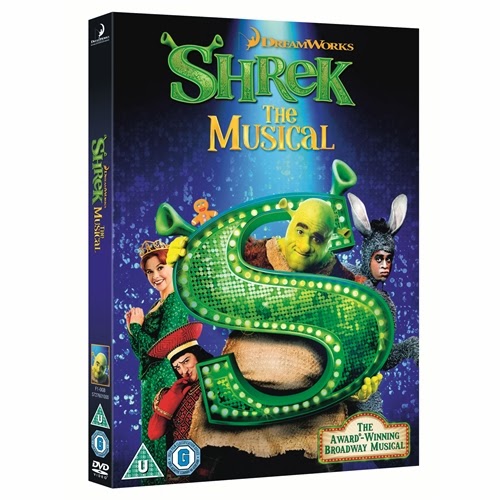 
BRING HOME THE MAGIC OF BROADWAY!

The greatest fairy tale never told comes to life as never before in Shrek The Musical, the Tony Award-winning Broadway musical based on the smash-hit movie!

Featuring a fantastic score of 17 all-new songs, along with unforgettable characters and outrageous humour, Shrek The Musical is ogre-sized fun for the whole family!


As a fan of the 'Shrek' movies, I was wondering how they could turn the anarchic humor and fun from those in to a full blown stage show.  With the movies being so hyper and rule by the performances of Mike Myers as Shrek and Eddie Murphy as Donkey, I honestly wasn't sure if they could pull it off.

I need not have worried because this filmed production featuring the Broadway cast not only does  the series of movies justice but also comes very close to making the characters their own.

Talking of the cast, they do an absolutely wonderful job of bringing the characters to life.  One of the best things I noticed was that while they stay true to the much loved movie characters, they also bring their own personalities in to the performances too.  It was really interesting to see a different spin on the characters made famous by Mike Myers, Eddie Murphy and Cameron Diaz and I must admit, the revelation for me was Sutton Foster as Fiona.  She gives the character of Fiona a bit more of a sly wink and knowing nod than in the movies and I couldn't keep my eyes off of her performance throughout the show.  In particular, her facial expressions were priceless and really worked brilliantly well in the musical setting.  Also, her voice was powerful yet had a fragile quality and is one of the reasons that I'll be buying myself the soundtrack.

Songs are the lifeblood of musical theater and while they are witty and funny, they do a grand job of portraying the feeling of the story to the audience.  That's helped by the superb cast that I mentioned above.  The songs sway between being hilarious funny and touching throughout the show and while you may recognize a few nods here and there to the movies, they really take on a life of their own.

Special features wise, I was a little disappointed in that there wasn't more of a variety but the making of documentary that we did get was a really interesting look at how they brought the show to the stage and kept it as close to the movies as they could possibly do.

All in all, even if you have only a passing interest in the movie series itself, this is a show that is well worth seeing.  If you get a chance to see it then I urge you do but if you can't, the DVD is most definitely the next best thing and well worth picking up.