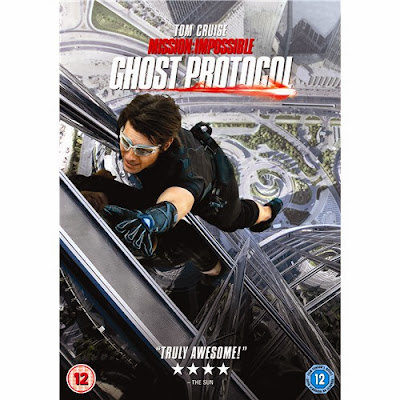 Based on the Television Series 'Mission: Impossible'
Created By  Bruce Geller


No plan. No backup. No choice. Agent Ethan Hunt (Tom Cruise) and his elite team (Jeremy Renner - Avengers and Simon Pegg - Star Trek) go underground after a bombing of the Kremlin implicates the IMF as international terrorists.

While trying to clear the agency's name, the team uncovers a plot to start a nuclear war. Now, to save the world, they must use every high-tech trick in the book.

The mission has never been more real, more dangerous or more impossible.


As a fan of the first three 'Mission: Impossible' movies, I was very eager to get to see this one after a five year gap between this one and the third one.  However, for multiple reasons, I didn't get to see it until now but was it worth the wait?

Here we have a movie that really brings the series back to the forefront with  a bang.  The story really clips along at a fantastic pace and really keeps the viewer guessing.  I also liked the addition of a couple new players in the 'Mission: Impossible' mythology as well, especially that of William Brandt played by Jeremy Renner.  Yes that Jeremy Renner that played Hawkeye in 'Avengers Assemble'.

Another nice touch was the little nods to the original series as well with little comments and moments that were in that beloved series.  There's a good one near the end for fans of that kind of thing.

Brad Bird, the director of the animated movie 'The Incredibles', took the helm here and has done a fantastic job of rejuvenating the franchise with some superb scenes and set pieces.  One of the best of these is the action sequence in the sandstorm.  I won't spoil it for you but for me, that was one of the big highlights of the movie for me as a fan.

The only thing that I didn't like about this installment was the humor provided by Benji Dunn, played by Simon Pegg.  In much the same way as the recent 'Star Trek' movie, it came across as mostly forced and actually started to annoy me half way through the movie as it had started to detract from the action that was on the screen.

It's a bit of a shame that there weren't more special features on this disc as I would have liked to have seen a bit more about the phenomenal stunt work but the couple of bits we have here are quite interesting.  The best of these being the featurette about the sandstorm scene.

All in all, this was a superb return to form for the 'Mission: Impossible' franchise, that started with the very well made third installment.  I, for one, am hoping that there will be a fifth installment sometime in the future.

Posted by Pat Scattergood at 09:32