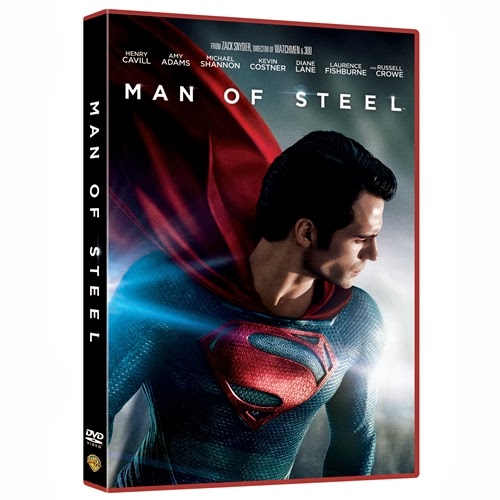 Based on Characters Created By
Jerry Siegel
Joe Shuster


Directed by Zack Snyder and produced by Christopher Nolan (who also directed The Dark Knight), Man of Steel is an action-packed blockbuster about the most recognised comic book hero of all time: Superman.

Henry Cavill bulked up to transform himself into Clark Kent/Superman, a role previously played on the big screen by Christopher Reeve and later Brandon Routh in Superman Returns.  How does he match up? Pretty well, we'd say.

The action begins on Krypton, where Jor-El is battling to save his planet and protect his infant son. We see a young Clark Kent growing up in Kansas and struggling to adjust to his extraordinary powers and the realisation that he's not like the other kids. Or even from the same planet. Taking advice from his loving Kansas farming parents (played by Diane Lane and Kevin Costner), Clark keeps his powers hidden from everyone and tries his best to fit in.

But the burning questions of who he really is, where he's from and why he's been sent here haunt Clark into his adult life. Hiding from his secret, will he embrace his powers to save the planet when Earth and his loved ones are under threat? Or will Clark's loyalties be torn when he has to battle the only two other surviving Kryptonians, General Zod and Faora?

The screenplay was written by David S. Goyer from a story by Goyer & Nolan based on Superman characters published by DC Entertainment.


After hearing all the bile aimed at this movie I have to admit that I was quite hesitant to get too excited over the newest Superman movie.  The trailers had made it look like a massive blockbuster and looked full of twists and turns.

When this was released at the cinema, the sheer amount of reviews and complaints about the amount of things that they changed astounded me.  I'm of the opinion that I don't mind if things about characters change because that's the nature of life in general.  Things and people change.  I know with a character as well known as Superman that is a hard thing to do without alienated fans of the iconic superhero so it took a lot of bravery on the writers parts to change some of the best known facts about the man in blue.

Not all of the changes are successful but on the other hand, they're nowhere near as bad or character ruining that some of the fans have made them out to be.

I could list them all here but I'm not a big fan of spoiler heavy reviews.  For me, part of the enjoyment is watching the movie and finding out what they have done to the characters as I watch.  Maybe that's just me though.

Movie wise, I actually really enjoyed it.  This darker take on the iconic character created by Jerry Siegel and Joe Shuster has breathed new life in to the character.  That's helped by the portrayal of Superman by Henry Cavill.  He really gives the character a lot of new layers.  He's not just the 'big blue boy scout' anymore.  He's not infallible anymore.  He makes mistakes, gives in to his anger and even becomes reckless during parts of the movie.  I really think that's a good thing because if he was just the normal 'do-gooder' style that has been portrayed in other movies then he would get stale.

The rest of the cast really do a good job with their characters.  I really wanted Kevin Costner to do a little bit more in the movie but he was superb in the scenes that he did have.  Amy Adams does a good job as Lois Lane too.  Laurence Fishburne is also a really good addition to the cast as Perry White but I think he was a little under used.

The story itself is well thought out.  Yes it does change some of the origin story for Superman but most of the changes do work seeing as they went the darker route.  For my part, I didn't think that it ruined the character like a lot of the reviews said.  Instead, I think that it was good to change the character up a bit.  After managing to miss most of the spoilers, I was eager to see just what it was about the ending that had the fans so up in arms.  While it wasn't the best ending they could have gone for, I still think it was effective considering how the rest of the movie had come before it.  The remorse showed afterwards really made the scene work for me as a fan and while I could see why some fans were upset it had gone in that direction, there are plenty of incidences in the comic books where the same thing happened.

Special effects wise, this movie was far and above better than a couple of the other movies that Snyder has done.  I wasn't that big a '300' fan and I especially didn't like 'Sucker Punch' but this one shows that while he is one to go for the 'flash bang' approach with his movies, he at least doesn't let it overload the movie like someone such as Michael Bay does.

All in all, I would honestly say ignore the bile aimed at this movie.  It's not the perfect Superman movie by any stretch of the imagination and there were a couple of plot holes that bugged me a little bit.  Other than that, it was the performances that really made the movie worth watching.  I have to admit that I don't agree with some reviewers saying that Cavill was better than Christopher Reeve yet I do think he gave the character a lot more layers than some of the other portrayals I've seen.

Well worth getting, especially if you can look past the changes that they've made to his origin story.