I Am Automaton Review 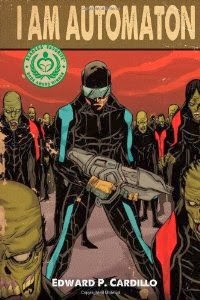 
In the near future, terrorists and drug cartels threaten the security of a United States reeling from the Rollercoaster Recession, escalating unemployment, and air saturated with toxic pollen. Sergeant Peter Birdsall's squad is wiped out by the Navajas cartel in Tijuana thanks to a tip from a mole within. The only survivor, he is recruited into the army’s mysterious infantry drone program by Major Lewis, who promises that the program will revolutionize the war on terror and the cartels.

While Peter is trained in the use of these infantry drones to hunt down enemies of freedom in normally inaccessible terrain, his younger egg-head brother, Carl, can no longer afford college. Tempted to follow in his older brother’s footsteps, Carl considers enlisting. Now, Peter must balance the dangers of his work with keeping his brother out of harm’s way. However, Carl, like the drones, has a mind of his own.


Since I started blogging and reviewing books, and in particular indie / small press books, I've been sent a lot of horror and action stories involving either viruses, terrorist attacks or even a combination of both.

When I saw that this one was another terrorist themed horror novel I have to admit that I was thinking the whole 'here we go again' mindset and therefore, wrongly, put off reading it for a little while despite it sounded really interesting.

I kept going back to the novel and looking at it but not giving it a full on read until now and I have to admit one thing.  I wish I had read it a lot sooner.

What we have here isn't the stereotypical terrorist or zombie story.  Cardillo manages to combine the two worlds as well as adding a military centered action story too.  Those things combine very well with Cardillo's fast pacing to create an exciting story with a hell of a lot of twists and turns.

One of things that I liked the most was that it wasn't just a splatter book or have gore just for the sake of having gore.  Instead this was an intelligent take on the zombie genre that combined the human aspect and really hammered home the idea of war not just being fought in the war itself.  It showed that a war of pretty much any kind is also fought in the minds of the soldiers, the people they leave behind and much more.  That really gave the story another aspect and hooked me in.

I also really liked the idea that the undead have been harnessed as a military weapon to fight the war against insurgents and the like.  While on paper that may sound a little far fetched, in the hands of a writer like Cardillo the story feels realistic and almost as if it could really happen.  It was a nice change to read a story by a writer that didn't feel the need to make everything bombastic and over the top.

All in all, if you like books with a military tint or a zombie story with a brain (although not one that you need to seek out and eat), then this is most definitely a book worth picking up.