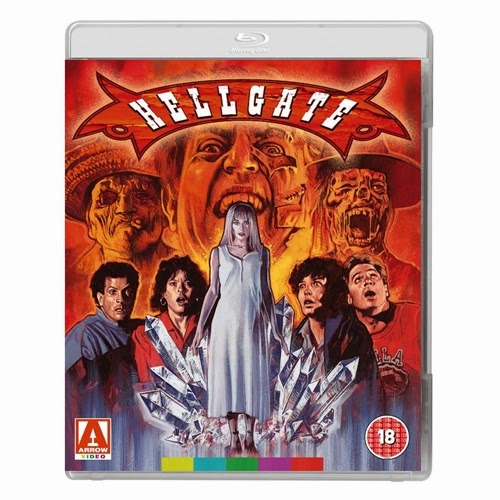 Directed By
William A. Levey


BEYOND THE DARKNESS TERROR LIVES FOREVER

Legends abound of 'The Hellgate Hitchhiker'. So the story goes, a beautiful young woman was once brutally defiled and murdered by a biker gang. Now, returned from the dead, she wanders the roadside luring unsuspecting motorists to their doom...

Refusing to heed the warnings of locals, a group of college friends set out on a cross-country road trip looking for fun and frolics. But they get much more than they bargained for when they wind up in the abandoned mining town of Hellgate and hemmed in by hordes of the undead!

Providing gore and gags in equal measure, Hellgate recalls the good old days of early 90s fright flicks and challenges other gleefully twisted flicks such as Re-animator and Return of the Living Dead for sheer grisly delirium!


I have always been a fan of 80's and early 90's horror movies and their general crassness and overall grimy, dirty feel.

This cult classic is most definitely no different.

The best way to look at this movie would be that it's most definitely of the 'B' movie feel but there are some great moments of off the wall comedy and at the same time, some great death scenes.  I mean come on, that's why you watch horror movies most of the time isn't it?

Cast wise, there are some massively wooden performances here yet that somehow adds to the overall charm and unique nature of the movie.  The humor kind of reminded me of the type found in movies such as 'Creepshow'.  While it's nowhere near that level of quality, I also think that this movie has got a bit of a bad rap review wise.

I have to admit however, nobody really stood out for me in the cast as being particularly memorable but at the same time, it makes the movie quite funny albeit unintentionally.

The movie itself reminded me a bit of a more in your face version of an Ed Wood movie in that it's one of those movies that is so bad that you can't stop watching.  Not because you want to see if it improves but to see just how much worse it can be but that's part of the charm of the movie.

Originally released by those folks at Anchor Bay on a bare bones disc, this re-release has shown that once again, Arrow Films has put some absolutely brilliant special features on this release.  It's a case of a movie that while it would entertain bad movie fans, it does come across as a bit of a missed shot really but the special features are well worth picking up the disc alone for.

This movie isn't for everyone by a long shot.  I personally like bad movies.  Movies by people such as Ed Wood etc that make movies that are so bad that they are perversely entertaining in that so bad it's fun to watch.  I do however draw the line at Uwe Boll.  However, while this movie is definitely under that title of a bit of cheesy fun, I still found myself enjoying and having a bit of a giggle at the movie itself.

That said, this release from Arrow Films is one of those movies that is well worth picking up thanks to the quality of the special features.  They really do leave no stone unturned here and it shows.  Arrow Films are known for going all out on their special features and it's definitely evident here too so for a horror geek like myself, the features here make it well worth splashing the cash on.