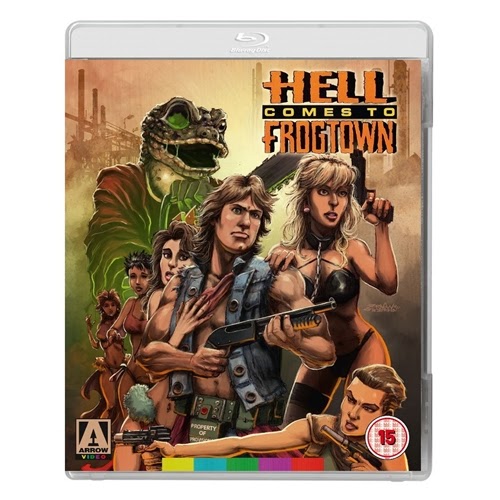 
With the 20th Century drawing to a close, nuclear war has wiped out civilization as we know it. The embattled human race's last remaining hope lies with one man and his loaded weapon.

Sam Hell may be an ex-con, but he also happens to be one of the last surviving fertile men on the planet. Now, under the custody of a group of feisty female fighters, Sam finds himself enlisted on a mission to impregnate a harem of beauties. Sounds cushy enough, but the ladies in question are prisoners of Frogtown - home to a gang of mutant (and ill-mannered) amphibians!

Starring wrestler-turned-actor Rowdy Roddy Piper, known to John Carpenter enthusiasts for his body-slamming and bubblegum-chewing antics in They Live, Hell Comes to Frogtown is unashamedly a B-movie through and through with more guns and girls than you can shake a frog's leg at.


I am a massive fan of 'B' movies and movies that are so bad that they are good fun to watch.  In all honesty, this one most definitely fits both of those descriptions.

In this 80's cult classic, Roddy Piper is the hero, if you can call him such a thing, that after being arrested is charged with both repopulating the world after a nuclear / biological war and with rescuing some women from the mutated frog people that have started to take over the world, all while having a bomb strapped to his crotch.

Yes, you read that right.  The wrestling icon 'Rowdy' Roddy Piper is going to travel around this crazy world, with a bomb attached to his crotch in order to repopulate the world while kicking the butts of some bad ass frog people.

If you go in to this expecting a dead serious science fiction movie such as 'Blade Runner' or something of that ilk then you are definitely watching the wrong movie.  In fact, there is no possible way to watch this with any hint of a serious nature.  It's one of the most wonderfully crazy and bonkers movie that I've seen in a long time.

The performances range from being completely off the wall and being utterly awful yet strangely in a good way.  While the performance by Piper isn't anywhere near as good as his seminal performance in 'They Live', he is still definitely the star of the movie itself.  However, William Smith comes very close to stealing the show with a great and over the top performance.

Arrow Films have done a great job in transferring the picture and sound here.  While previously released in a bare bones release by Anchor Bay, this transfer is much clearer and crisper.  That's especially true for the sound quality that is absolutely crystal clear.

It's the same with the special features.  The release isn't as jam packed with features as some of their other cult releases but for a movie that didn't have that much of a budget, they still managed to stick some really interesting bits and pieces here.

All in all, this is definitely another great release from Arrow Films that is well worth adding to your collection, just don't go expecting a deadpan and straight laced movie.