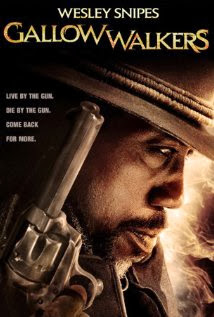 
A cursed gunman (Snipes) whose victims come back from the dead recruits a young warrior to help in the fight against a gang of zombies.


After interviewing Joanne Reay when she released her debut novel, I remember hearing about a movie called 'Gallowwalkers' that she had been involved in making.  After doing a bit of research I found that it had originally been made 6 years ago but had been mired in production hell and only recently got released on to DVD in America last year.

After hearing that and seeing the horrendously low scores that the movie was given on many different web sites, I have to admit that I was a bit hesitant to sit back and watch this one despite it's interesting premise.  Would the movie really be that bad?  Would it really be so unwatchable?

Well, after watching it I have ti admit that it was nowhere near as bad as some of the critics made it out to be.  In fact, I actually quite enjoyed watching it.  I've seen some very bad horror movies in my time as a reviewer but I wouldn't class this as one, although that said, I wouldn't say it was a perfect one either.

The movie itself has it's fair share of flaws.  Story wise, the interesting premise aside, it's a standard revenge movie dressed up in a supernatural western setting.  While the writing is OK for that kind of story, even better than a fair few other westerns I have seen recently, there are quite a few plot holes that hurt the overall quality of the movie.  In fact, there were a couple of characters that seemed to come out of nowhere with little to no reasoning, which took me out of the movie a couple of times.

As for the acting, it's better than in the last couple of supernatural movies I've seen.  It's not perfect but Wesley Snipes does his best 'I'm being Blade but not Blade' impression as Aman, a man intent on revenge.  There's even the WCW wrestler 'Diamond' Dallas Page as Skullbucket, a undead enemy with a spiky bucket / helmet on his head.  Overall the performances aren't universally awful but at the same time, the cast don't go out of their way to create memorable characters.

The gore factor, and that's why most people watch supernatural and horror movies, is actually fairly well done.  There are a couple of shoot out scenes and even a couple scenes of heads being ripped off that are done in a pretty bloody fashion so it's obvious that they had at least a middle range budget.

One of the things that puzzled me however were some of the costumes, especially on the villains of the movie.  One had a spiky bucket / helmet on his head that made me think of Monty Python and one even had lizard tails sewn on to his head.  Kind of added to the overall strange atmosphere of the movie and the off kilter feel of the story.

To be honest, this isn't a movie that you should go out and rush to watch.  However, that said, it is nowhere near as bad as some of the reviews made it out to be.  The plot holes do hurt the movie a lot but at the same time, I actually enjoyed it much more than I thought I would.

Posted by Pat Scattergood at 04:10