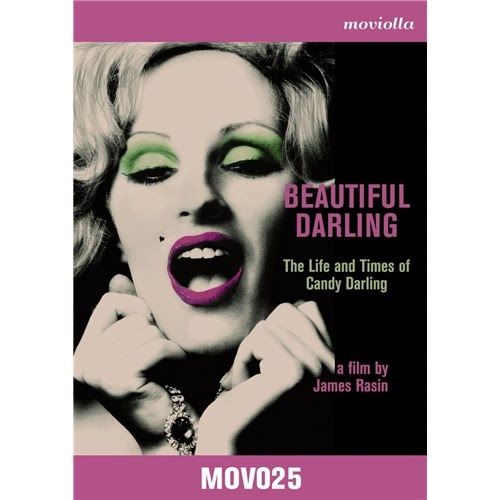 Written and Directed By
James Rasin


Beautiful Darling pays tribute to the short but extraordinary life of actress Candy Darling, Although born a man she was drawn to the feminine from childhood and by the mid-Sixties James had become Candy, a blonde actress and well-known New York character.

There she became close to Andy Warhol and starred in two of his movies. Candy used her Warhol fame to land further film roles, but tragically she died of lymphoma at only twenty-nine.

The film uses both current and previous interviews, excerpts from Candy's own diaries and letters to explain her life. The films explore the glamorous parties, the famous friends and most of all the strength of will she demonstrated in her remarkable act of self-creation.


The story of Candy Darling is one full of hope as well as tragedy yet strangely is a story of trying to find yourself amongst all the people in the world.

I've read quite a few books on her life  as well as a few articles so I was really looking forward to seeing this one, especially after hearing so much about how good a documentary it was.

Candy Darling is a cult figure amongst Andy Warhol fans in that she was one of the most famous of the 'Warhol Superstars' and that she had so much promise that I really felt that she could break out of the mould made by Andy Warhol that would sometimes plague the others in his inner circle.

Excerpts from her diary, published in book form as the book 'My Face For the World to See', are read here by the criminally under rated actress Chloe Sevigny.  Her fragile voice really bring Darling's words to life here yet don't write her off as a victim or a sob story.  That would be a massive flaw and really a poor service to the makers of the documentary and Candy Darling's life.

Jeremiah Newton apparently first approached the director to make this movie and it really shows the level of love and care that Newton had for Candy.  His story really touched my heart in that he recorded oral interviews with friends and family of Candy throughout the years and you get to hear some of the great stories about her childhood and her early years.

For me, that really added another layer to the documentary in that it gave it a personal side to it instead of being a stale word for word look at someone's life.

The thing to remember is that Candy Darling became the glamorous star that she had always yearned to be and while her life was short, she accomplished a lot in a short time on this Earth.  The one thing that did bug me a bit was that they glossed over a few, 'not so innocent', moments in her life.  They also didn't link the connection between the Cancer that killed her and the hormone medication.  Maybe that seemed to be because of Jeremiah's involvement in the making of the documentary and that hurt the documentary a little in my eyes.

All in all, this was a very fascinating look at the tragic, short life of Candy Darling.  I really thought that they did a good job at giving us a look at what made Darling tick and her early years as well as the fact that even when dying from Cancer, she just didn't stop performing until the very end.  Definitely one well worth picking up if you get the chance.