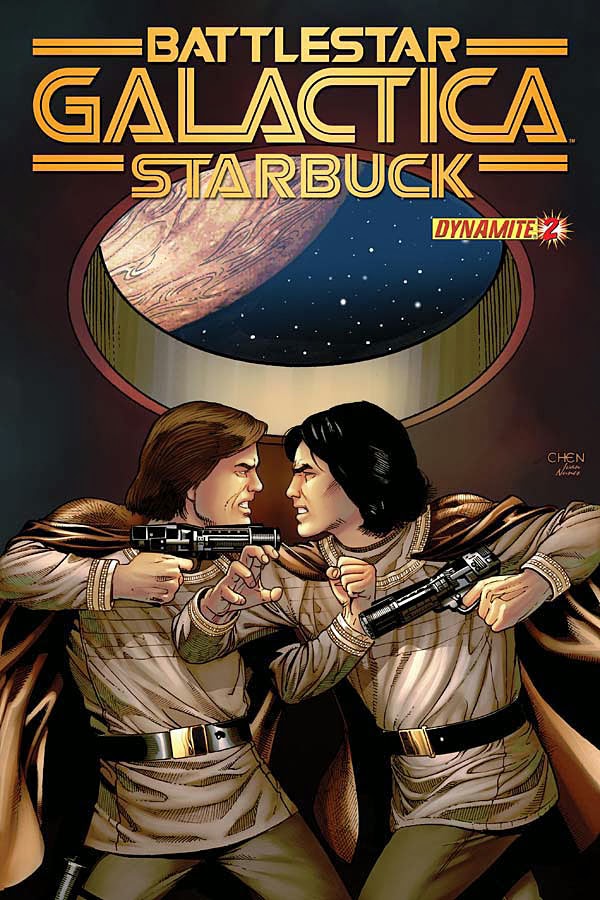 Two years before the attack on Cimtar, Starbuck has hit rock bottom - but when a clue to the Cylon spy behind the attack on Umbra appears, Starbuck finally has a chance to gain justice for his parents.

Can Starbuck and Apollo find the spy before the Cylons stop them?


One of the things that has always impressed me about both the original and the remade versions of 'Battlestar Galactica' is that while it was a massively exciting series set in space, a lot of the action revolved around the characters lives and how they interacted with one another.  Yes there were the Cylons and traitors and pretty much a plethora of twists and turns along the way but for it's part, it was quite a character driven series.

That continues here in this prequel mini-series of comics written by the best selling author, Tony Lee.  Obviously a fan of the original series, Lee has managed to get the characters so close to their television counterparts that this story wouldn't feel out of place as part of the original series run..

One of the things I liked the most about issue one of this mini series was the fact that we were getting  to see just why Starbuck, one of the most popular characters, was the way he was.  Sometimes that can come across as a little bit too late for characters or even as filler but that's not the case here.  Every revelation about the characters past in the first issue seemed to be placed at just the right moment and that trend continues here.

The story does concern trying to find the traitor who is working with the Cylons but at the heart of this issue is an intensely emotional look at how Starbuck is grieving for a personal loss and how that changes the way he sees his world and the people in it.  The writing by Lee is incredibly strong and personal  to the effect of making the reader feel like they are part of the crew on BSG and are watching it unfold before their very eyes.

There were some fantastic twists in this issue and that really hooked me in to wanting to read the next issue.  Part of me is actually a little disappointed that this is going to be a mini-series because I would loved for them to do the same for some of the other characters but less is more I suppose.

The art is, one again, superb.  They really seem to get the sometimes claustrophobic nature of the characters jobs across on the page in a great and very well drawn way.  A lot of that is down to the panel placing as well.  They don't seem contend on just slapping a couple of panels on the page and leaving it at that.  I loved the fact that some of them were over lapping and some of them were angled.  The character work is brilliant as well with them looking massively similar to their television counterparts yet having the artists own spin put on them.

All in all, it is true that this is maybe a title for the die hard fans of 'Battlestar Galactica' but it's definitely a title that is well worth picking up.  It's worth grabbing for the sheer strength of Tony Lee's writing.  Not only does he manage to keep the feel and atmosphere of the show but he manages to put his own style and voice in to the proceedings without alienating any of the fans.

Definitely a title that I will keep picking up.