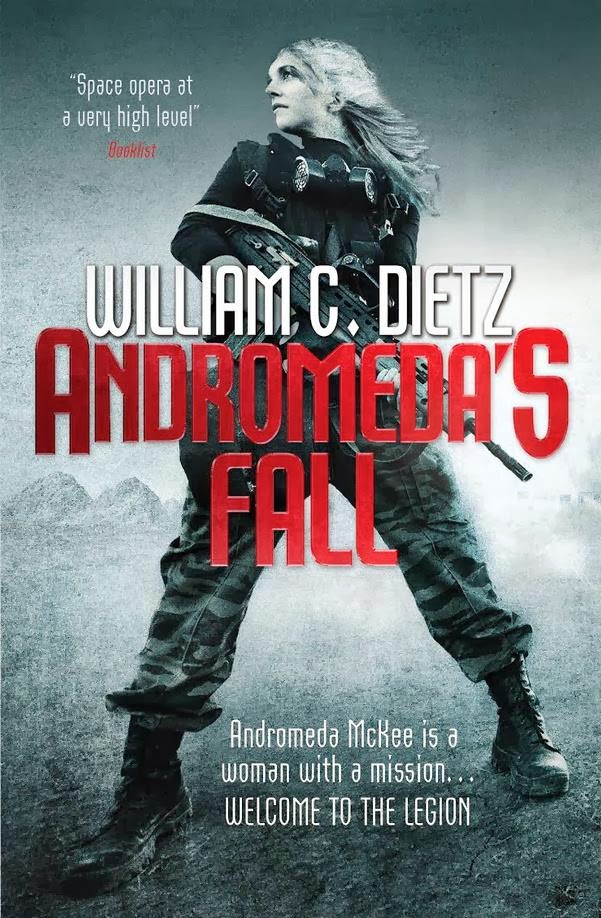 
When a bloodthirsty power grab on Earth results in the murder of her entire family, wealthy socialite Cat Carletto is forced into hiding.

On the run from the ruthless Empress Ophelia, and seeking revenge against the woman who destroyed her  life, Cat enlists in the Legion - an elite cyborg fighting force made up of society's most dangerous misfits.

On the battlefield, Cat Carletto vanishes, and in her place stands Legion recruit Andromeda McKee.

As she rises through the ranks, Andromeda has one mission: bring down Empress Ophleia - or die trying.


Just lately, I have been reading a lot of military science fiction novels.  So far, I've been pretty lucky and not read a duff one. Considering that this novel is by William C. Dietz, I had quite high hopes for it.

Not only did it match those high hopes, it surpassed them.

One of the things I have always liked about Dietz's work is that not only does he create authentic world that are populated with realistic characters that  the readers can really get behind but he also writes such vivid action scenes that it feels almost like a movie sequence.

While Dietz has gone back to his 'Legion of the Damned' series, this also works as a stand alone story too, which is a nice touch because it means that even if you haven't read any of the previous books then you will still find it easy to follow this one.

The story itself is very well written, although I wouldn't expect any less from Dietz.  The pacing is also really well thought out and gives the readers a good atmosphere to really get involved with.  As far as the tale itself goes, while the idea of someone wanting to gain revenge for a murder isn't a new one.  It's especially not a new one in the realm of science fiction either but Dietz has written this novel in such a way that it hooks you until the very last page.

One of the things that I find to be the most interesting about the story is the journey that the main character makes from stereotypical spoiled rich girl to bad ass action heroine.  While a bit of a cliche in itself, it's written with a subtle, steady hand and knows when to ramp up the action and when to have a character driven scene.

Dietz is known for his action scenes and this novel is no different.  They really do have a rather cinematic feel to them and feel like they wouldn't be out of place in a big budget blockbuster movie.

All in all, if you like exciting science fiction stories but with well rounded and sympathetic characters then you are most definitely in luck with this novel.  Like I said before, don't worry if you haven't read any of the other series because this one works very well as a stand alone novel.  In fact, it does a superb job of creating such interesting characters that you will be hooked in to wanting to turn page after page until you reach the end of the book.