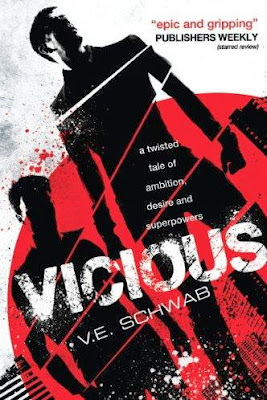 
Victor and Eli started out as college roommates—brilliant, arrogant, lonely boys who recognized the same sharpness and ambition in one another. A shared research interest in adrenaline, near-death-experiences, and seemingly supernatural events reveals an intriguing possibility: that under the right conditions, someone could develop extraordinary abilities. But when their thesis moves from the academic to the experimental, things go horribly wrong. They become EOs, ExtraOrdinaries, leaving a body in their wake and turning on each other.

Ten years later Victor has escaped from prison and is determined to get his revenge on the man who put him there, aided by a young girl with the ability to raise the dead. Eli has spent the years hunting down and killing every EO he can find, convinced that they are a crime against God, all except his sidekick, a woman whose power is persuasion and whom he cannot defy. Armed with terrible power on both sides, driven by the memory of betrayal and loss, the arch-nemeses have set a course for revenge—but who will be left alive at the end?


I haven't read a good superhero novel in a very long time.  Each time I pick one up, I get excited on the way home, sit down to read it and then end up getting disappointed by stale story lines and flat characters.  It's a shame really because when done very well they can be some absolutely fantastic stories that can tackle very hard subjects.  When done badly, they can come across as a bit like bad fan fiction.  So where does this novel by V.E. Schwab stand?

To class this as just another superhero story would be doing the tale a massive disservice and you would be missing so much of the plot that you really wouldn't get the full effect of the story.  That would be a massive mistake because there are so many layers to the novel that you could read it many times and notice new things  with every reading.

Summing the story up is a hard thing to do with a novel like this without giving away spoilers but here Schwab has crafted a great story of jealousy, revenge, hatred and even loneliness that is tied up in to a superhero bow yet has such a deft slight of hand that you can absolutely hate comic books or superheroes and still find so much here to enjoy..

The intelligent writing really makes the story sing out loud and doesn't once insult the readers intelligence by adding easy to see plot twists.  In fact, Schwab's tale had a few twists that completely took me by surprise.  However it's not the intelligence of the writing that is this books true strength, it's the characters.

A lot of the time in a book like this you get wafer thin characters with little to no personality.  It's completely the opposite in this release.  We have characters that aren't just the stereotypical good  and evil style people that we are used to seeing.  In fact, it's pretty much the case of the readers siding with the lesser of two evils in a couple of cases and I liked that.  Nothing in this book is black and white.  That made a nice change in that it gave proceedings a bit of a new spin on a genre over crowded with stories that fall flat.

All in all, I would recommend this, not only to superhero fans, but to anyone that wants to read a well crafted story with strong characters but is packed full of twists and turns that will keep you guessing until the final page.  I just wish it had have been a little bit longer because I was enjoying the story so much.