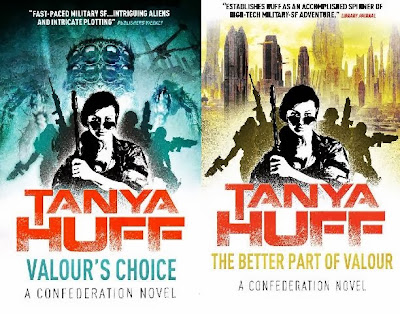 
In the distant future, humans and several alien races have been granted membership in the Confederation—at a price.

They must serve and protect the far more civilized species who have long since turned away from war. When her transport ship is shot down, a routine diplomatic mission across the galaxy becomes anything but, and Staff Sergeant Torin Kerr must fight to keep her platoon alive.


The Better Part of Valour


When Staff Sergeant Torin Kerr makes the mistake of speaking her mind to a superior officer, she finds herself tagged for a special mission for the interplanetary Confederation to act as protector to a scientific exploratory team assigned to investigate an enormous derelict spaceship.

Along with her crew and her charges, Kerr soon finds herself in the midst of danger and faced with a mystery that takes all her courage and ingenuity to solve.


I'm used to reading the supernatural and fantasy novels that Tanya Huff has done in the past so it came as a bit of a surprise when Titan Books emailed me to say that she had done a military science fiction series.

I figured I'd give it a go and I'm glad I did for the most part.  The two books here aren't up to her usual high standard but are still well worth a read but let's not get ahead of ourselves here.

Let's start with the first novel in the series, 'Valour's Choice'  that sets the tone for the series.

The thing about military from the science fiction genre can sometimes come across as a bit too much on the whole 'the world is screwed' side of things and have really weak characters.  However, Huff really strikes a pretty good balance between having layered characters as well as creating a great sense of danger and action throughout the story itself.  However, it's not without flaws.

While the characters and dialogue are massively strong, there are a few moments here and there that make the action seem like an after thought.  That's a bit of a shame really because the rest of the book is so good that when it falls down a little bit, it's really noticeable.

With the second novel 'The Better Part of Valour', the story comes across as a bit weaker than the first story.  It's true that this one has a much more interesting premise than the first book yet for some reason, it just doesn't gel as well.  The characterization is there as is the incisive and sometimes even witty dialogue but it still manages to fall a bit flat.

Maybe some of that is down to the fact that most of the characters have completely changed.  The new additions do stand up well next to the returning characters but none of them really strike me as all that memorable.  Also the alien nature of the ship that there on isn't really explored and that feels like a massively missed opportunity.  I would have loved to have seen that brought to the forefront a little more but alas, it wasn't meant to be.

Also, sadly, the ending just seemed skimpy when compared with the rest of both books.

All in all, the first book is by far the much better of the two.  That said, the second one isn't entirely a loss, it has some great moments.  While there are a few flaws here and there, especially in 'The Better Part of Valour', but there are enough high points to make the series worth picking up.

The Better Part of Valour