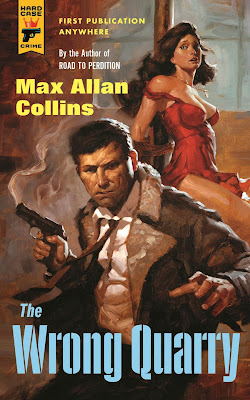 Quarry doesn't kill just anybody these days.  He restricts himself to targeting other hitmen, availing his marked-for-death clients of two services; eliminating the killers sent after them, and finding out who hired them...and then removing that problem as well.

So far he's rid the world of nobody who would be missed.  But this time he finds himself zeroing in on the grieving family of a missing cheerleader.  Does the hitman's hitman have the wrong quarry in his sights?


Max Allan Collins, the author of the incredible 'Road to Perdition', has long been a favorite author of mine.  His crime and action novels always seem to have strong characters, great locations and non stop action so I had really high hopes for this one?

While it doesn't reach the high standard of 'Road to Perdition', 'The Wrong Quarry' comes very close.  It has a classic feel to it.  A bit like a Raymond Chandler novel or a Humphrey Bogart movie.  Yet at the same time, Collins has crafted a well paced, intelligent and action packed thriller that had me gripped from the very first page and didn't let up until well after I'd finished the novel.

It's true that some of the characters seem a little bit old fashioned in a way but that's part of  the charm of the novel itself.  The story feels timeless and modern at the same time.  It's hard to juggle the two styles like that without the story feeling disjointed but there's no such problem here thanks to the exciting writing by Collins.

The pacing here is fantastic and really doesn't give the reader a chance to catch their breath or even remotely get bored.  In fact, I found the book nigh on impossible to put down because I just wanted to get to the next page to see what was going to happen next.

If you are a fan of the Hard Case Crime imprint from Titan Books then this one is definitely up with 'Joyland' by Stephen King as one of the best releases from them.  It's exciting, has an old school charm to the story and even comes over feeling like a classic movie that Humphrey Bogart wouldn't have looked out of place starring in.  Well worth picking up, I would even say that if you are a Max Allan Collins fan then this should be an essential purchase for you.