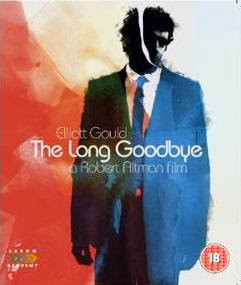 Based On
'The Long Goodbye' By Raymond Chandler


When private eye Philip Marlowe (Elliott Gould) is visited by an old friend, this sets in train a series of events in which he’s hired to search for a missing novelist (Sterling Hayden) and finds himself on the wrong side of vicious gangsters. So far so faithful to Raymond Chandler, but Robert Altman’s inspired adaptation of the writer’s most personal novel takes his legendary detective and relocates him to the selfish, hedonistic culture of 1970s Hollywood, where he finds that his old-fashioned notions of honour and loyalty carry little weight, and even his smoking (universal in film noir) is now frowned upon.

Widely misunderstood at the time, The Long Goodbye is now regarded as one of Altman’s best films and one of the outstanding American films of its era, with Gould’s shambling, cat-obsessed Marlowe ranking alongside more outwardly faithful interpretations by Humphrey Bogart and Robert Mitchum


As a major Robert Altman fan, I am well aware of the massive reputation surrounding this movie.  Misunderstood at the time, it then went on to gain a hell of a lot of fans with it's superb writing and direction.  However, there are quite a few differences from the book by Raymond Chandler and that incensed some fans of the literary version of Marlowe.  That was a shame really as the portrayal of the character is positively superb and surely, sometimes, change is a good thing.

With a name like Elliott Gould attached, you just know that you are going to get a powerhouse of a performance and that is exactly what happens here.  His portrayal of Marlowe, despite being quite different from Chandler's vision, is a master class of how to create a multi layered character that will rule through the entire movie.  He seems washed up in an unfamiliar world, a man both unsure of himself and overly confident yet being cynical at the same time.  One of the best examples of this was when Gould, obviously as Marlowe, says to the police that are questioning them "Is this where I'm supposed to say 'What's all this about?' and he says 'Shut up, I ask the questions' ?".

If you're thinking this is just Elliott Gould's show then you would be wrong.  The cast here more than hold their own against the performance that many people see as Gould's best performance of his career.  One of the best of these is Henry Gibson who is gleefully greasy and off putting as Doctor Verringer and Nina van Pallandt lends an air of respectable dignity in her role as Eileen Wade.

I would be remiss if I didn't mention the photography of the movie by Vilmos Zsigmond, who gives the movie a wonderfully bleached out aura and that adds to the feeling of feeling washed out.

This is most definitely a movie that more than lives up to it's reputation.  Not only does it boast the best performance in Elliott Gould's storied career but it's also the best movie that the legendary Robert Altman made in his directing career.  When you consider that he made some fantastic movies, that's very high praise indeed.

If you are a movie fan at all then I can't urge you enough to pick this one up.  The transfer is gorgeous, the special features are spot on and some of the best I have seen in a release from Arrow Films.  What more could you want?

'The Long Goodbye' is available to buy from 16th December
Posted by Pat Scattergood at 12:28