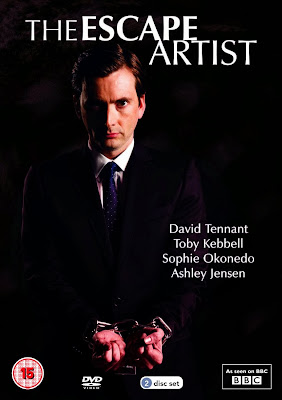 
Will Burton (David Tennant), a talented junior barrister of peerless intellect and winning charm, specialises in spiriting people out of tight legal corners, hence his nickname - The Escape Artist.

Much to the aggravation of his courtroom rival, Maggie Gardner (Sophie Okonedo), Will is in high demand, as he has never lost a case.

But when Will's talents acquit Liam Foyle (Toby Kebbell), who is standing trial for an horrific and high-profile murder, that courtroom brilliance comes back to bite him.

Foyle walks free, but he is a serial killer and surely it is only a matter of time until he kills again.

Also starring Ashley Jensen, this is thrilling action drama at its best.


As a massive David Tennant fan, I will pretty much watch anything the man is in.  Comedies, drama, everything he is in seems to have an air of quality to it.  The man seems to give us multi-layered charcters but with an emotional edge to them that makes viewers care about what happens to them.  It doesn't matter whether he is playing The Doctor or, in this case, a barrister, he puts his all in the character.

With this psychological thriller, I had very high hopes for the story itself.  The idea behind it sounds so scarily realistic that it hooked me in for the most part.  The idea that a lawyer could get someone off for a crime they committed only for them to carry on is quite a scary one if I'm honest and even got me thinking about if that has ever happened to this degree.

However, there were a few moments for me that veered in to melodrama to such a degree that it was almost a parody.  Those moments took me out of the drama of it all a couple of times and that hurt the story but despite that, the performances more than made up for the shortfalls.

Of course, you have Tennant himself.  The change his character goes through in this mini-series, while not an original one, is still incredibly well acted out by Tennant.  Even in the more melodramatic moments, Tennant just adds a level of quality to proceedings.

However, the chilling performance by Kebbell is one that really got under the viewers skin.  It was part evil psycho and part calm 'Hannibal Lecter' style murderer.  His portrayal of the character could have gone off in to being completely over the top, and in the final third that comes close to happening,

As always, Sophie Okonedo, was absolutely brilliant.  She gets the balance of her character spot on and there's a wonderful scene between her and the Foyle character that is then reprised later on in the story that while simple, it's so well played that it comes across as wonderfully creepy.

The only part that didn't really feel as good as the others was Ashley Jensen as Kate Burton.  Her performance was very well done but the character herself seemed like a bit of a missed opportunity and the writing for her felt like it was going through the motions.

All in all, this mini-series, while full of great performances is a little let down by the writing that sometimes comes across as a little lazy and sometimes over melodramatic.  That's a bit of a shame and is the most evident in the final half hour or so where the writing and the actions of the characters seem to come out of left field and feel really out of place with the rest of the story.

That said, the performances by Kebbell, Tennant and Okenedo make it well worth picking up.