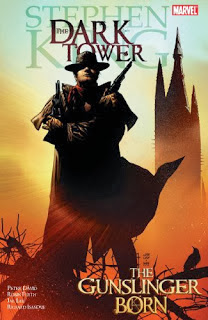 Based on
'The Dark Tower' Series By Stephen King


A man's quest begins with a boy's quest.

The world of Roland Deschain - the world of the Dark Tower - has been a thirty-year obsession for Stephen King.

And now, King carries his masterwork of fantasy to Marvel, bring stunning new textures to his epic story!

The Gunslinger Born seamlessly integrates the wonder of Mid-World and the story of its hard-bitten cast of characters into the finest Marvel Comics storytelling tradition.

Witness the birth of a gunslinger and the epic sweep of a timeless adventure that has just begun to unfold!

Long days and pleasant nights, and may ya do well!


As a massive Stephen King fan, I have obviously read the 'Dark Tower' series, which includes some of his best work writing wise.  The world building, the characters, they all come together to create a series that not only comes across as a classic adventure but also one that you just can't put down.

When I received this, the first volume of the adaptation of the series by Marvel Comics, I have to admit that I was a little hesitant in getting excited as I have read some adaptations of his work before and they have mostly fallen short.

That's when I saw that the great and very talented writer by the name of Peter David was involved and that's when I grabbed it and started to read it from cover to cover but would it live up to the high standard set by the master of terror himself, Stephen King?

For once, and this is a pleasant surprise, this is an adaptation and continuance of the series that not only does the original series by King justice but also adds a few layers as well.  Considering how thought out the original series is, to add yet more layers to an already well written world shows just how good a writer Peter David is.  He most definitely doesn't disappoint here either.  His writing shines through with the story and brings the characters right to the forefront of the tale itself.  However good the writing is, that's not the best strength of this graphic novel.

That is by far the stunningly beautiful art by Jae Lee and Richard Isanove.  There are some stunning scenes here and some of the best panel work that I have seen in a long time but amongst all of that are some brutal scenes as well.  That would normally look massively out of place yet they fix together seamlessly.  That's because the writing and the art really go hand in glove together.  The characters have really taken their cue from the original books by Stephen King and the artists have worked together brilliantly well in recreating those beloved characters.

Another thing that I couldn't help but notice was just how well Lee, David, Isanove and Furth all worked together to bring the world created by King to life.  There may be a couple of moments that have changed slightly but you can't keep everything the same and in all honesty, there will also be some fans that feel like too much has changed with a release like this.

All in all, I honestly believe that this is the best job that this team could possibly have done in adapting a Stephen King series.  I would even go so far as to say that it is one of the best versions of a work by King that I have ever had the pleasure of reading.

If you are a fan of the 'Dark Tower' series of novels then I highly urge you to get a hold of this and see just how a Stephen King adaptation should be done.