The Coming of the Avengers Review 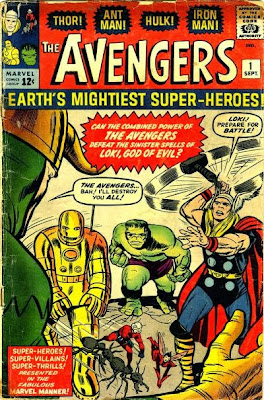 Loki hatches a plot against his hated stepbrother Thor, drawing Earth’s mightiest heroes into the fray!


Jack Kirby.  Stan Lee.  Two names that need no introduction except for maybe the term legendary.

Here we have the first appearance of the legendary team 'The Avengers' and I was lucky enough to grab a chance to read the now classic story.

I absolutely love the story behind how the issue came in to being.  One of their other titles had been delayed, 'Daredevil' I believe, and as they had already paid for the printing time, Stan Lee and Jack Kirby had to come up with an idea quickly.  That's when they thought that combining a villain and some superheroes that already existed would save time and be able to get to the printing presses in time and so a legend was born.

To new comers to the comic book world, the story may lack a little spark or even seem a bit quaint but to long time fans, this one is definitely one worth reading.  It's great to see how the beloved team came together and in fact, considering how little time Kirby and Lee had to create the story and art, it's actually extremely well done.  Then again, what else would you expect from them?

The story itself sees Loki trying to turn Hulk in to a bad guy so that a team of superheroes are distracted enough for him to get his revenge on Thor.  That may not seem like it would grip a recent fan but Lee's writing is exciting, fun and full of his trademark humor that I absolutely loved each and every page.

It's the same with Kirby's art.  There's a reason Kirby was known as 'The King' and it's stories  like this that really show off his skills superbly.  There was so little time for him to illustrate this story that it would have been understandable for his work to not be as good as his other titles but that's not the case here.  That's especially true on the action sequences, always one of Jack Kirby's strengths.

All in all, this story is important for so many reasons.  It's the first appearance of the team that would go on to become one of the most beloved super hero teams in history.  Also we get see just how good  Stan Lee and Jack Kirby work together.  It may seem quaint in today's standards but I honestly believe this is up there with some of Kirby and Lee's best work and one of the reasons why they both more than deserve their legendary reputations.