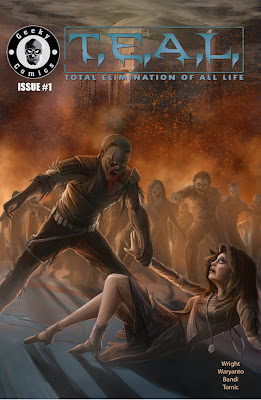 
When the Earth is all but finished, the human race decide to find another planet to inhabit.   But the occupants of 1304 don't want the earthlings to spread their diseases, bring crime and violence - so they quarantine them, till they can decide what is to become of the visitors.

Impatient and fearful for their lives the humans decide differently and attack the new race turning their planet into a haven of un-dead terror.


Victor Wright is the sort of comic book writer that feels more than at home in pretty much any genre.  You have mobsters and crime in 'The Lawless Ones', war and horror mixed together in 'Exposed', vampires in 'Esmee' and more.  Here we have science fiction, zombies and more all rolled in to one but is this title one title too far for the prolific Victor Wright?

What we have here is an interesting mix of ideas, most of which work very well.

The one thing  that struck me was the artwork.  The art style took me completely by surprise but in a good way.  It did admittedly take me a couple of pages to get used to the sometimes cartoon style art yet somehow, it works really well with the story.  It's the sort of art that shouldn't work with this type of comic book because you'd go in to a story like this expecting a dark, gritty style yet that's not what we have here.  That said, the rather bright and cartoon style art work is one of the titles strengths.  Because the art is slightly at odds with the story itself, it leaves the reader feeling a little off kilter so when the violence bursts forth, it really takes you by surprise.  It's been a long time since the art in a comic book has done that to me but I am most definitely looking forward to seeing where the art is going to be taken in issue 2.

Writing wise, it's Victor Wright so you know what you are going to get.  Characters that are strong on the action and not afraid to get their hands dirty while the story moves along at a cracking pace.  With this one, it's a much faster pace than say 'Exposed' so you don't get really get a lot of time to get to know the characters yet it doesn't affect the story here all that much.  Instead, you are thrown in to the action pretty quickly, then there's a slower part in the middle before all hell breaks loose again.  The best way to describe the title is that it is quite a rollercoaster of a comic book and I liked that.

If you have read the prolific Victor Wright's comics before then you know that you are in for a good, strong ride and that's the case here.  While the art is slightly at odds  with the dark storyline, it actually works really well and adds another layer to the release itself.  The action scenes really jump off of the page because of the bright colours and simple lines, which really hooked me in as a reader.

'T.E.A.L.' is definitely a title well worth sticking on your pull list.