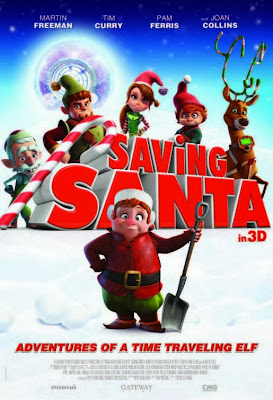 
A lowly stable elf finds that he is the only one who can stop an invasion of the North Pole by using the secret of Santa's Sleigh, a TimeGlobe, to travel back in time to Save Santa - twice.


Just recently I have been watching a ton of Christmas movies with my little lad to get him all ready and excited for Christmas so when I was given the chance to watch this new release, I jumped at the chance.  I mean how could you not want to watch this when it has a cast like this?

The first thing I noticed about this movie was the animation.  In a couple of scenes, it just seemed a little off but for the most part, I really liked it.  It's not the crisp, clean style of Disney or even Pixar but that's not to say that the animation here doesn't have it's credits.  There are some absolutely hilarious scenes and some that look absolutely gorgeous too.  Their eye for the details is used really well in that if you keep your attention on the screen, there are some great going's on in the background.

Cast wise, you have some great people in this movie.  My favorite being Noel Clarke, famous for his role as Mickey in Doctor Who.  His animated character looks just like him but in elf form and also takes some of his mannerisms too.  I have  always been a fan of when movies do that with a character and this one is no different.  Martin Freeman gives a great performance as Bernard and makes the character hapless yet sympathetic.

However, the best role is definitely that of Tim Curry as Neville Baddington.  He delivers his lines with such evil glee that you can almost imagine his character from 'Rocky Horror Picture Show' delivering the lines.  The minute his character appears on the screen, you know who the voice is and as the movies villain, he does a superb job.

Story wise, the movie isn't going to win any awards for originality but at the same time, I've seen a hell of a lot worse.  I loved the time travel idea behind the movie and there were a lot of nods to movies such as 'Back to the Future' and many more that were a lot of fun to spot and notice.

All in all, while not Earth shatteringly good, this is still one of those nice Christmas movies that are done well enough to keep the little ones interested while throwing a couple of jokes here and there for the parents.  For a movie that you can sit down and watch with the little ones, you could do a lot worse.