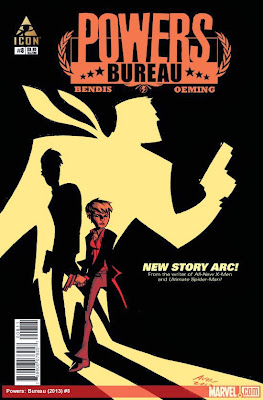 
From the best-selling writer of ALL-NEW X-MEN and ULTIMATE SPIDER-MAN comes another explosive chapter of the Eisner Award-winning cops-and-capes epic!

Walker and Deena head to Hollywood, where the most elite powers have gathered together as the Seven! Except one of them has been brutally murdered — and no one is talking.

Plus: Walker isn't supposed to be using his newfound superpowers on Earth, and he's about to pay the price for it.


After the disappointing end to the first story arc for the 'Powers Bureau' title, Bendis and Oeming managed to regain some of the momentum with  the much better 7th issue, which had a stand alone story.

Here in the 8th issue, they begin a new arc but that leaves me wondering about something.  When the first arc started, it started with a bang but ended with a faint whimper.  Is that how this one is going to end up or are they well and truly back on their feet?

If this issue is anything to go by then that's a resounding yes.  The issue starts with a bang, literally, as the new Retro Girl is kicking the everlasting daylights out of a villain and then it keeps that momentum going right up to the shocking ending.  Bendis seems to have reverted back to the way of revealing just enough to whet your appetite but keeping enough back to make you want to get the next issue without reverting to cheap tactics.  Yes the ending is shocking and there is a great moment involving Walker but they're timed to perfection.  It's honestly reawakened my excitement for the title and I can't wait to grab the second issue of this story just to see where Bendis is going to take it next.

The art by  Oeming is, as always, superb.  His knack of being able to pick out the right bits and pieces in the scene to draw your eyes directly to the action is here in all it's glory.  That's especially true on the fight scenes, that have a hyper kinetic yet cinematic feel to them, and in the reveal of the murder scene.  You open those pages and really have a 'holy crap' moment when you see them.  Oeming is one of the best comic book artists out there and it's issues like this one that really play to his strengths and is one of the many reasons that I look forward to titles that involve him on art duties.

With issue 8 in the bag so to speak, 'Powers: Bureau' has most definitely regained a lot of the quality that was missing in the last couple of issues of the previous story arc.  As a long time fan that had been somewhat disappointed with how that one ended, it's great to get an issue that reignites the thing that made me a fan of the title to begin with and I can't wait for the next one!