Pirates of the Lost World Review 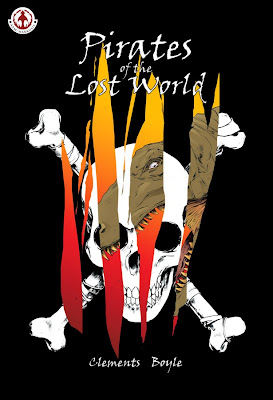 
Captain Gideon Lester has hunted the ruthless pirate – Captain Fletcher – across the Atlantic. When he sinks the pirate’s ship, he finds himself in an impossible situation.

Trapped in the Amazon, surrounded by savages and deadly dinosaurs, he has to join forces with Fletcher’s crew to have any hope of getting out of this Lost World alive…


The only thing I knew about this release was the simple description of "it's pirates fighting savages and dinosaurs' and you know what readers?  That was more than enough for me to want to grab this one and give it a read.  As a fan of movies with random as hell plots as that, I couldn't wait to see how this graphic novel would flow.

I have to admit, I absolutely loved it!

I won't lie, the story does sound a little hokey the way that I had it described to me but when you actually sit down to read it, it comes across as a bit of a mix of 'Treasure Island' and Sir Arthur Conan Doyle's 'The Lost World' yet still retains Clements unique voice in the writing.

The story reads like one of those old fashioned movies such as the aforementioned 'The Lost World' and 'Journey to the Center of the Earth' yet somehow keeps a modern sensibility about proceedings.  There are also some great moments that come across as quite darkly comedic as well.  However, the main strength is that of the main characters.  I loved how they were old enemies and that even though they were having to work together to survive that you could see there was still a big level of mistrust there.  While the idea of having two enemies working together for a cause isn't an original one in the comic book world, or even the world in general, it's done really well here.  The pacing is superb and the story really moves along quickly without giving the reader a chance to breathe.  I love stories like that in which you want to read page after page to see what is going to happen next without having to resort to cheap cliffhangers.

The art here really does the story justice for nearly all of the graphic novel.  However there were a couple of panels where I, personally, would have liked to have seen a little more detail and that would have made the pages come even more to life than they do already.  Other than that the art suits the story brilliantly well in that Boyle's style seems to really make the scenes in which the characters are in danger pop off the page when you are reading it.  I especially liked how the meetings with the various dinosaurs and savages are handled as well, creating a sense of menace amongst them.

All in all, this is another good release from those folks at Markosia.  While the story line may seen a little hokey to some, give it a read.  What you will find here will surprise you because while it does keep a certain vintage charm to the story, it's exciting, action packed and incredibly well written by Clements.  With an eye on the classic and still given it a modern spin, he's crafted a graphic novel that is most definitely well worth picking up.