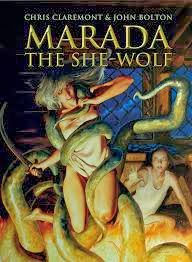 A fantasy classic, fully remastered, fully restored and collected together for the first time ever!

Ablaze in blood-soaked battle and insidious sorcery, unearthly desires, terror, and evil, this is the ultimate vision of the ultimate fighting fantasy female!


Chris Claremont.  John Bolton.  Two names that are hugely renowned in the comic book world and for very good reason with their legendary writing and art work styles.

What do you get when you pair the two of them?

You get 'Marada the She-Wolf' and what a ride the stories turn out  to be.

Here we get all three of the stories featuring the legendary character and they don't seem to have aged at all.  Even now, 31 years after her first appearance in Epic Illustrated, these stories still grip the imagination and really make the stories come to life.  That's in equal measure thanks to the writing by Claremont and the absolutely gorgeous artwork by John Bolton.

The writing here doesn't fall in to the normal cliches that riddle the fantasy world.  Instead, we get fully fleshed out characters that you care about.  You get adventures that will hook you for their entirety.  You get action sequences that your eyes will stay glued to for the entire collection.  Then again, what else can you expect from the man that wrote 'The Uncanny X-Men' for 17 years and brought to comic book fans some of the most famous story lines that the comic book world is still talking about now.

Art wise, John Bolton delivers some of the best work that he has ever done in this collection.  Not only do you get his stunning work on the Marada series but you also get some previously unseen art work too and for a comic book fans out there, that's an absolute delight.  The art during the 'Marada' stories ranges from being absolutely stunning to bringing the exciting action scenes to life in such a way that each little detail looks fantastic.  However, it's the little details that Bolton does so well.  To make the characters come to life, he adds so many little things to make them more realistic that it would honestly be impossible to talk about them all here.  It's the little things like how they place their feet while standing, the rise of an eyebrow and much more that brings this title to such a legendary status and rightfully so.

For once, a title that has such hype and reputation to it, not only lives up to that hype and reputation but also exceeds it.  I hadn't read these stories for years and they have honestly aged  like a fine wine.  The stories absolutely gripped me for the entire book and contain some of the most beautiful art that I have ever seen in a comic book series.

I can't recommend this title higher than I already am.  It's one of those titles that definitely is well deserving of it's stellar reputation.