Lust in the Dust DVD Review 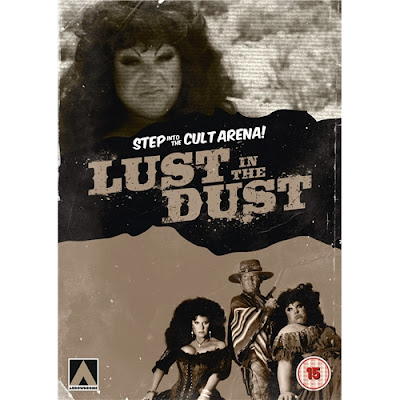 
The sun beats down hard on the town of Chili Verde, New Mexico - where temperatures flare and passions reach boiling in the midday heat. The locals spend their days downing Tequila and breaking bottles over heads... and that's just the womenfolk!

When Abel Wood, an enigmatic lone cowboy type, comes riding into town, the locals immediately suspect that he has come in search of the legendary buried gold. Quick on the draw and tall in the saddle he may be, but Abel faces stiff competition if he's to get his hands on the prized booty.

Lust in the Dust is a treat for both fans of Westerns and lovers of John Waters-type subversive humour, featuring the inimitable Divine (Hairspray, Pink Flamingos) in a typically larger-than-life performance; whilst Tab Hunter, in the role of Abel, delivers a sharp-shooting, gun-toting turn worthy of Clint himself.


I've always had a bit of a weird and slightly off kilter sense of humor and that has sometimes led me to watching some really weird comedy movies.  I love everything from the old school slapstick of Charlie Chaplin and Buster Keaton right up to the weird comedy of John Waters.

While this isn't a John Waters movie, it's as close as someone can get without actually being the weird genius John Waters.

The best way to describe this movie would be as a John Waters western.  That may put some people off but that would be a shame if it did.  What we have here is a massively funny western with some really good performances all done with a bit of tongue in cheek and sometimes even un-PC humor.

You have a rather interesting and unique cast here that not only features legendary people such as Cesar Romero, yes the man who played The Joker in the 1960's Batman series, and even John Waters stalwart Divine as well.  I'm not going to sit here and say the performances are perfect because they're not but they are enjoyable to say the least.

If you like John Waters or comedy such as 'Blazing Saddles' then you are most definitely going to get a kick out of this little known 80's gem.  It's a bit sad that more people aren't aware of this movie but thanks to Arrow Films that will hopefully change that.