I Am Scrooge: A Zombie Story For Christmas Review 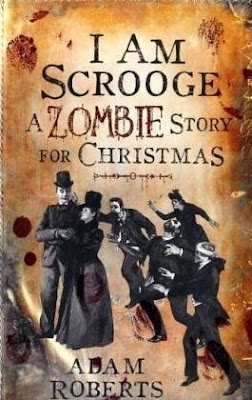 
Marley was dead, to begin with...

The legendary Ebenezeer Scrooge sits in his house, his riches forgotten.  Downstairs, his front door shudders and shakes under the blows from the zombies that crowd around it hungering for his flesh and his miserly braaaaiiiiiinns!

Just how did the happiest day of the year slip into a welter of blood, innards and shambling, ravenous undead on the snowy streets of old London town?

Will the ghosts of Christmas Past, Present and Future be able to stop the world from drowning under a top-hatted and crinolined zombie horde?

It's the Dickensian zombie apocalypse - God bless us, every one!


Over the years  we have had a ton of the classics turned in to zombie / monster stories thanks to companies such as 'Quirk Classics' and others.  Some of these have been absolutely superb and well written and others, well, not so much.  The thing that intrigued me the most was just how the writer could fit the zombies in to one of the most beloved Christmas stories ever written.  Also with so many of these types of books  out there now, would this one stand out from the already over crowded genre?

There are some great moments throughout the book that were absolutely hilarious but then there moments that were absolutely groan worthy as well.  I suppose that's part and parcel of the genre but there were a few times that the story veered off in to YA territory, which considering some of the scenes are quite in your face with their settings, just feel massively out of place.

Despite that flaw, this book is actually quite an entertaining read.  As 'A Christmas Carol' is one of my favorite stories of all time, I easily recognised where there they had fitted the new parts in with the classic story of redemption.  For the most part, it seemed pretty seamless except for the scenes that I mentioned earlier.  Roberts' writing has an easily flow to it and that really adds to the story itself in that you just want to keep reading to see just what he is going to throw at the characters next.

There were some really good illustrations throughout the book that were drawn by Zom Leech.  As weird as it sounds, considering they involve zombies and much more, they look like they wouldn't be out of place in another book from the Dickensian era.  They have an old fashioned feel to them and that adds to the atmosphere of the book.

All in all, I wouldn't say that this is an essential book.  However with that said, this is definitely an entertaining read and even a good stocking filler for the festive period for the zombie fans out there.