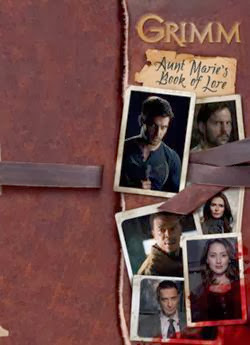 
As his Aunt Marie is dying, homicide Detective Nick Burkhardt discovers he is descended from an elite line of criminal profilers known as “Grimms”, who keep the balance between humanity and mythological creatures.

As well as inheriting the “gift” from his aunt of being able to see the creatures’ true forms, he also inherits useful artefacts, including the Book of Lore.


If you are a fan of the 'Grimm' television series then you know just how important Aunt Marie's Book of Lore is in relation to the show itself as well as the characters.  It keeps the show moving at a cracking pace, gives the viewers some great character growths as well as providing some of the twists that the show is getting known for.  But is it worth having a tie in book set out like the one in the show?

Well?  It's a resounding yes from me guys and girls.

What we have here is a superb facsimile of the book that we see so many times in the show.  It's well set out, well thought out and looks as though someone has actually handwritten it.  However, the handwritten part is where one of the minor quibbles on my part come from.  There are a couple of parts in the book that are a little hard to read because of how the handwriting appears on the page.  That's the one problem when doing a book to look handwritten however, there will always be someone that may have trouble reading some parts of it.

The only other minor quibble on my part is the cover.  I was hoping that they were going to make it look like the book in the show but instead, they have made it look similar but they then put photographs of the characters themselves on there as well.  I understand why they did it in that way, to appeal to fans that may be passing by because just having it look like the book in the show may just appeal to the hardcore fans.  I just felt the book itself would have been a bit more impressive done slightly differently cover wise.

There are some absolutely fantastic pieces of art work in this book.  To be honest, there are a couple of pictures that made me want to own the book just for those alone.  They really show the characters we've seen already and others that we haven't in a really exciting way.  Superb.

The writing for the creatures is very well done and really gives the fans of the show a good insight in to who some of the creatures are and why they are a certain way.  I also liked how the writers really seemed to be able to translate Aunt Marie's personality in to the book as well.  It really did read as if she had actually written it for real.

If you are a fan of the television series 'Grimm' then this is definitely a purchase that you need to make so you can have it in your collections.  It's a superb addition and companion to the mythology of the show and even adds some great information to the characters that we have come to know and watch on a weekly basis.  However, the problem with that is that if you haven't seen the show at all then you may feel a little bit lost but that said, the artwork in this book comes very close to being worth getting the book for.