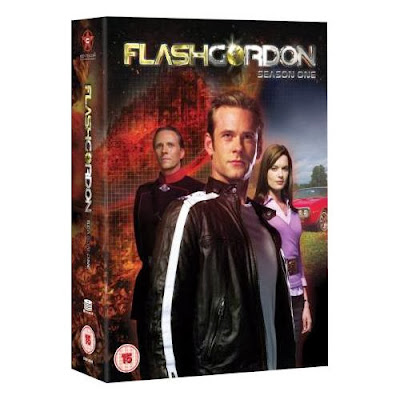 Based on Characters By
Alex Raymond

Steven "Flash" Gordon used to be just an average, all-American guy. That is until he fell through a rift in space and found himself on the planet Mongo.

Suddenly plunged into life-and-death interplanetary adventures, Flash is shocked to discover that his father, who mysteriously disappeared years earlier, may still be alive and in the hands of Ming, the evil ruler of Mongo.

Contains all 22 episodes from season One plus an alternative version of the pilot episode.


Special Features
Review
In this day all the sci-fi that is on our television seems to be going for a dark and gritty feel to it.

This is the complete opposite. It has a sense of fun and general wonder to some of the episodes. While some aren't as successful as others, I wouldn't say that this is as much of a failure as some of the reviews make it out to be. The idea of there being a wormhole from Earth to Mongo is a bit similar to the whole 'Sliders' idea but I kind of liked it. Most of the earlier episodes mainly took place on Earth, which was one of the complaints about the series, but the later ones started having more and more stories set on Mongo. The fact that they weren't all set in the same place helped to keep the stories more or less fresh but some of the writing let it down and let's be honest, there were a few groan worthy moments as well.

The cast really do their best the wafer thin characters and sometimes dire dialogue but with the first couple of episodes of the show being so awful it felt like they were just going through the motions in places.  In fact, it felt a little bit like they knew the episodes were badly written that they just didn't want to put too much effort in to their performances.  Once the momentum started to  pick up, the performances did as well but I was a bit let down by the series as a whole as there were so many stories that just never seemed to go anywhere.

From what I've read people actually went online to literally demand that this show get cancelled. I really don't see why because it really was an OK show once it got going.  It's just a shame that most people gave up after the first few episodes.  I can understand why they gave up however, the first few episodes were absolutely dire in places.  It seemed to be once it got to the middle of the series, it seemed to start to click but the damage was already done.

While not up to the level of the revived Battlestar Galactica or even the short lived Enterprise series, it's still relatively worth picking up because you can get it for next to nothing but don't go in to with high expectations because even with mine quite low, I was still quite disappointed with the show overall.