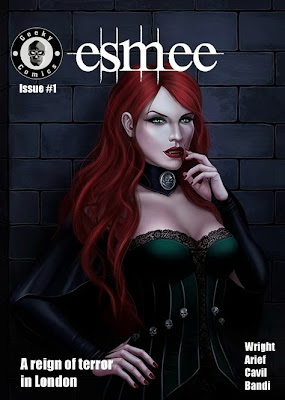 Written and Created By
Victor Wright


Conman Jack Bollard, finds his way into the arms of wealthy, French, Annabelle Cristof.  Only to murder her within six months of marriage.  His plans are thwarted, when he realises her riches are still out reach until his new step daughter comes of age.

Furious, Jack plots to murder the girl - but it all goes wrong when he brings her home to London and turns her into a woman of the night and Esmee meets a thousand year old vampire.


At this rate, Victor Wright is going to have his own section on this site with the sheer amount of releases he manages to put out.

With the amount of comic books Wright writes, you would think there would be a dip in quality at some point but thus far there hasn't been.  He always manages to keep the writing at a good quality for all of his titles.

But that begs one simple question.  Where does this vampire tale from the mind that gave us 'Exposed', 'The Lawless Ones' and many more, fit in?  As we all know, the vampire genre is incredibly crowed, especially in the comic book world.  There have been some good titles, some great ones and sadly, some absolutely awful ones so  I have to admit.  I was a bit hesitant with this one.  I knew that the writing would be good as would the pacing but just how many more ways can comic book writers make the now diluted blood suckers interesting again.

I need not have worried at all.  Wright has crafted an exciting story yet one that has a deliberate pace.  It kind of reads like a comic book with old fashioned sensibilities yet with an eye to today's comics.  The best comparison would be with the recent 'Sherlock Holmes' comics that Dynamite have been putting out recently.  They're set in the past yet are written with such an eye to the comics of today that they really hook in the reader.  Victor Wright has done exactly that here.

Instead of falling for many of the old cliches that a lot of vampire writers stumble over, Wright does a superb job of putting a new spin on it.  Due to the pacing, the characters are given room to breath and that really helps the story grow on the reader.

With the intelligent writing, you needed to have art that would have the subtle touch that Wright brings yet be done in such a way to keep the eyes glued to the page.  That's what we have here in spades.  I was honestly surprised at just how good the art was in that it's some of the best I've seen in this genre for a long time.  It suits the story brilliantly well and has some great touches like the use of shadows and subtle facial expressions really give the story a cinematic feel to it.  Your eyes are drawn to every detail on the page and that really brings the quality of the story to the forefront.  I have to admit that I wasn't massively aware of the artists involved in this title.  I'd heard their names but never gotten around to seeing the titles they've worked on yet after seeing the work here, I'll definitely be checking them out.

If you are tired of the weak as hell vampires that we seem to be stuck with in the media these days that seem to do more sparkling than blood sucking then you should definitely check this one out.  It may just prove to you that the vampire genre still has fangs.