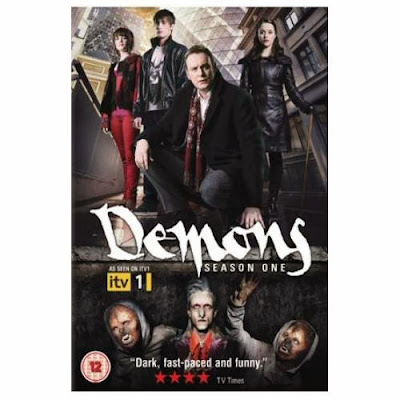 
Luke Rutherford is your average teenager - until his dead father's best friend, Rupert Galvin, turns up.


The ITV channel probably thought that they had a British version of 'Buffy The Vampire Slayer' on their hands when they announced a new series by the name of 'Demons'.

Intended as a continuation of the Van Helsing legend, while at the same time trying to be an edgy, urban show set in modern day London. They couldn't have gotten it more wrong if they tried.

The stories are absolutely by the numbers, cliched and come across as 'Angel' / 'Buffy The Vampire Slayer' rip offs without any of the intelligence of either of those two series.  There were some enjoyable moments and some flashes of brilliance, especially that of the character of Gladiolus Thrip.  I wish they had have been given a bit more time to develop him the way it looked like they were going to but by then, most viewers had pretty much given up on the series.

The cast definitely just going through the motions here but by far the biggest culprit of this is Philip Glenister. Best known for his turn as Gene Hunt in both 'Life on Mars' and 'Ashes to Ashes', I have no idea what he was thinking with this piss poor performance. He seems to be working through his horror movie cliches book a bit at a time and even manages to look bored as hell during the battle scenes. Another thing that made me think was his atrocious accent. I'm not sure what kind of accent he was going for but it kept changing throughout the series. Hell, it was changing during the same scene a couple of times.  I'd go so far as to say this was definitely a case of here's a butt load of money so do whatever you want.

To say it's nearly all bad isn't an understatement. The only two bright spots are Zoe Trapper as Mina Harker, who somehow manages to breathe a bit of life in to a one dimensional character. The other high spot was the gloriously over the top performance by Mackenzie Crook as Gladiolus Thrip, a demon who tries to destroy the newly formed team.  Like I said earlier, that was the one character that I actually wanted to see more of because it really seemed like they were going somewhere with him.

Other than that, this series is absolutely awful. The only reason I gave it a 4 and not lower is the simple fact that the two performances I mentioned were enjoyable. It's such a shame that they were wasted on such a poorly set out and written show.