With COASM being alive on the good ol' Internet for just over a year now, we figured it was time to do our first ever year end awards so without furthering any ado's, here are the top ten comic book and graphic novel releases that have been reviewed on here this year. 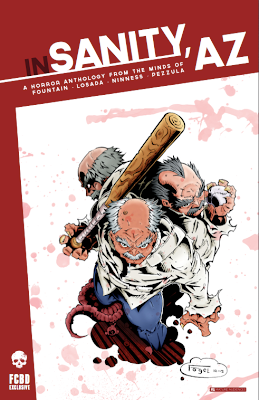 This wonderfully screwed up, but in a good way, anthology series will both make you laugh and horrify you at the same time.  There are so many superb talents at work here that it would be neigh on impossible to note each and everyone of them but two shine out above all of them for me.  Those are James Ninness, who really does come across as one of the main driving forces of the title, along with the superb Joe Pezzula.

Some of the stories, and the overall collection in fact, come across as a messed up hybrid of all the horror greats such as Stephen King, Dean Koontz and many more and if that isn't a reason to grab this title then I don't honestly know what is. 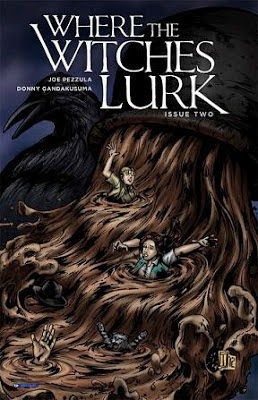 Where The Witches Lurk

Yes, you have read that right.  Joe Pezzula has a 2nd entry in this top ten and it's well deserved.  Here he has crafted a tale of two young girls who battle witches alongside their father.  When one such battle goes massively wrong and their father disappears, they start to feel majorly out of their depth.

The idea of two youngsters battling witches may not sound like the most original idea in the comic book world but here, Pezzula has created a brand new take on that idea and expands on it brilliantly.  Fast pacing and some great revelations really make this one worth keeping an eye on. 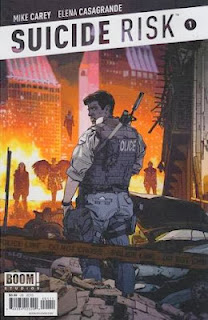 Boom! Studio's brought to us this year a tale of people with super powers turning up without warning all over a city and then that power corrupting all and sundry.  The problem with that is that there are more super villains than heroes but that will soon change when a beat cop finds a way to even the score.

'Suicide Risk' is a title that tries something new and really hits it bang on the head.  There are some superb plot twists thanks to the intelligent writing by Mike Cary, which makes the title really zoom along at a fast pace.  The main strength of the title however isn't the story.  It's the fact that the story itself fits the art perfectly.  That helps to bring the story to life in such a way that you can't wait to see what the next issue is going to bring.  Definitely a title worth keeping up with and one of the reasons that Boom! Studios is a company to keep watching. 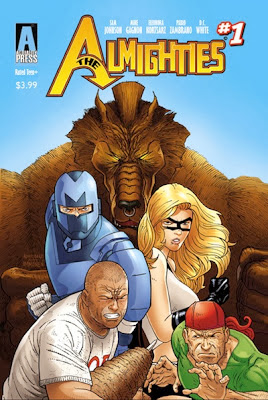 This superhero comedy by Gagnon and Johnson really lampoons the hell out of superhero teams such as The Avengers in such a caustically sarcastic that you would think that the story would be lost under it all but that's not the case here.

We have a hilarious yet exciting story that really grips the reader as well as entertaining them.  You don't get that very often.  The reader gets that alongside some bright and well drawn art by some very talented artists such as Eleonora Kortsarz, Pablo Zambrano and D.C. White.

Keep your eyes on this title, especially on December 30th when a new installment is unveiled! 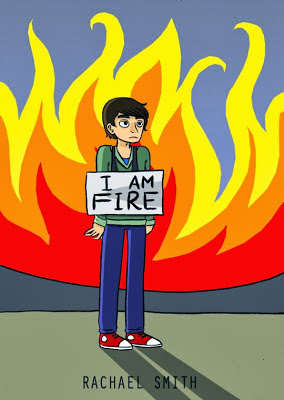 Written and Art By
Rachael Smith

In this one by local Leicester lady, Rachael Smith, you have a young schoolgirl named Jenny.  She's embarking on her work experience  at a posh department store where she doesn't really fit in at all.  That all changes when she meets Chris.  However, there's one problem.  He's a pyromaniac.

Rachael Smith is best known for her creation, Flimsy the Kitten, but here she branches out with a tale of love, humor and the way that sometimes a person just won't fit in.  Smith creates a story full of heart and filled with some fantastically funny yet touching moments.  She really knows how to craft characters that really feel realistic and come to life off the pages of her comics.   That's also down to the art as well.  Her bright, colorful style is completely endearing to the reader and rightfully so. 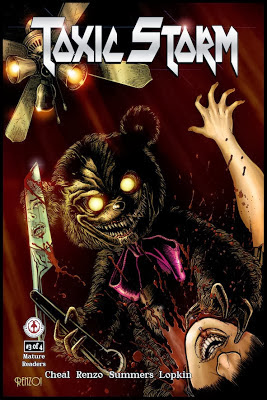 This action, horror series from Adam Cheal is positively  superb.  It brings forward memories of watching grainy horror movies from the 80's but in such a way that the comic almost takes on a cinematic feel.  Couple this with the supernatural story line, which if I describe here would be too spoiler heavy, 'Toxic Storm' is a gripping tale of hate and revenge.

Great action set pieces, art that literally flies off of the page and some fast paced revelations all add up to making this a title that you should be reading. 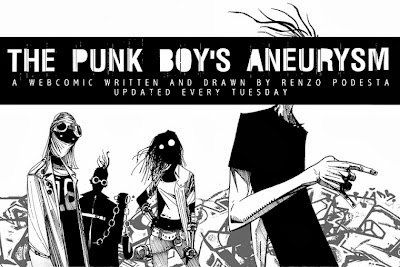 Written and Art By
Renzo Podesta

This massively unique web comic from Renzo Podesta really is hard to describe.  One of the best ways that I can think of to describe it is that it feels a little like a more coherent 'A Clockwork Orange' but I mean that in the best way possible.

This was the first web comic that I've ever read that I actually couldn't wait for the next update to see just well the story was going to be taken next.  The writing had a dark, almost apocalyptic feel and yet felt like something that could happen in this day and age.  There was no need for gimmicks or 'jump the shark' style plot developments

If any of you get the chance then I most definitely would recommend this unique yet gripping web comic. 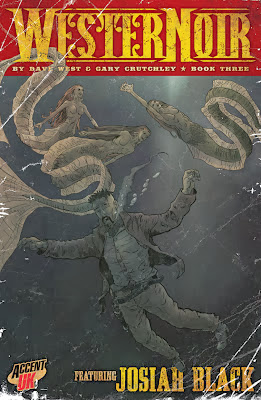 This year I've been reading a hell of a lot of Accent UK releases but there was one that stood out above all else for and that was this supernatural western written by Dave West and drawn by Gary Crutchley.

Mixing the supernatural with steam punk elements as well as setting it all in a western setting was a bold and brave move.  It's a risk that could have fallen flat on it's face but that's incredibly far from what happened.  Instead we ended up with a series starring the enigmatic character, Josiah Black.  Piece by piece, West tells us a little bit of Black's past but seems to choose the perfect time to reveal the perfect part of the mans personality and reasons for how he is.

The starkly beautiful art by Crutchley is so suited to the tales that I honestly couldn't imagine anyone else doing the art for the series.  It would be a bit like listening to The Beatles without Paul McCartney.  The art itself really brings out the feeling that something is not quite right with the world that Black inhabits and really gives some subtle clues as to where the story is going to go.

If you like well paced supernatural stories but with a thread of drama running alongside the action then this is definitely the title for you. 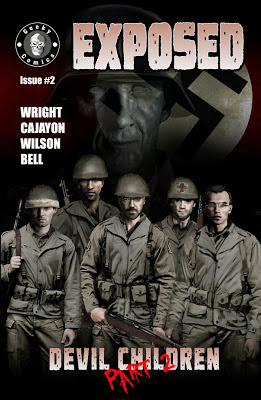 Talking of the supernatural, here comes a title from the wonderfully prolific writer Victor Wright.  If you are a regular visitor to the site then you know just how much of a fan this site is of his varied and prolific work.  The man really does seem to be at home in any genre and  that's no different here.

'Exposed' is a supernatural horror set in the 2nd World War.  Not only do you see the horrors of the war itself but you also see a side of the Nazi war machine that you wouldn't expect to see.  Wright's writing here takes a bit of a slower and more deliberate pace than his other work and that works brilliantly well, fostering  a feeling of dread inside the reader as the tension creeps up.  At the same time, we get glimpses of what life is like back home as well to lend the story an emotional edge and that is one of the many things that raises the quality of this title above the many supernatural titles in the comic book world right now.

The art by Nino Cajayon is another string to the 'Exposed' bow in that it takes the dread and horror that the writing creates and brings it to the forefront.  There are so many great moments in this title, and more to come I'm sure of it, that I really can't wait to where the next development is going to come from.

'Exposed' is a title that is most definitely one to watch and in my eyes, one to read again and again.

And finally, last but by all means, the entry for the top spot on COASM's first year end comic books award. 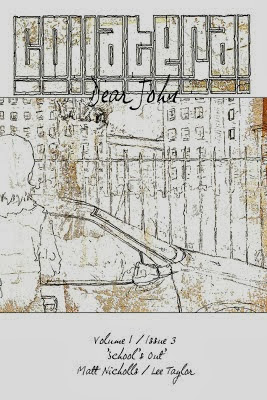 I have to admit one thing.  Choosing between this one and the title in the number 2 spot was massively hard.  They are both absolutely superb comic book titles  with great writing and gorgeous art work but this one just edged it for me.

However, it's not the big bang style action packed tale that comic book fans may be used to.  Instead Matt Nichols has crafted a deeply personal and affecting look at a family who seem to be cracking under the strain of life.  However, it's not a normal kind of life.  Instead this comic book series shows the aftermath of all the super hero / super villain battles that seem to get blown off in every Marvel, DC and pretty much every other super hero comic published.  You seem the demolished buildings, you see the people that have lost their jobs because of the devastation that the heroes and villains have called and I think to create such an intensely personal story such as this shows a writer at the top of his game.  The slow pacing may not be to everyone's taste but to me, I love how you find out a tiny little more in each issue.  I love the subtle nature of the nods towards something big coming.  There's no near to be big and brash about the story when it's this intelligent.

It's the same with the art by Lee Taylor.  As affecting as the story is, that would all be for nothing if the art work didn't live up to the insanely high standard set by Nichols but it more than lives up to it.  Instead it takes a look at the writing and adds so many little details to it such as a move of an eyebrow, something in the background, the positioning of the shadows.  It's the sort of art style that will make you, the reader, notice something new each time you read it and I think that is why this is a well deserving winner of COASM's first year end award for best comic of the year.

Well done to Matt Nichols and Lee Taylor and personally, as a comic book fan, I can't wait for the next issue!
Posted by Pat Scattergood at 16:27