A Haunting in Salem DVD Review 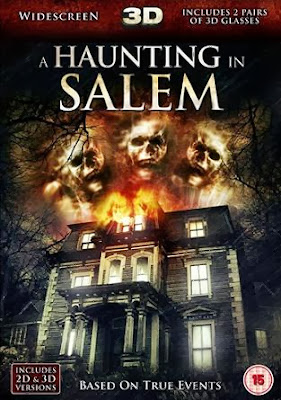 
The new town sheriff (Bill Oberst Jr) moves into a large creepy old house with his family. It seems that in the town of Salem there's a special house for the sheriff to live in gratis. Unfortunately it's haunted by witches that have a strong craving for sheriff's blood.


As an avid fan of  horror movies, I've heard both good and very bad things about this movie so I wasn't sure about watching it but on a cold winter night, I figured I would give it a go.

The question here is was it as bad as some of the critics made it out to be?

Well, to be honest, no.  It's not perfect by any stretch of the imagination but there are some good performances here but that said, I wouldn't really class it as a full blown horror.  There are some horror elements here, especially in the final third, but the most part it comes across as more of a psychological thriller with supernatural elements.

There aren't that many scares during the movie that will creep you out.  It's more that the scares will get under your skin a little bit while you watch the main character descend in to madness as the stories and supernatural elements combine to make him doubt even the things that he is seeing.

That's where the performance by Bill Oberst Jr. comes in to its own.  He's known for playing the crazy people, the full blown psychotic parts that rule the screen yet here he plays it completely differently.  He plays the part of the sheriff with a subtle and slow moving charm and then ramps it up in ever so slight moments so that when the inevitable does happen, it's still very affecting.

The only part I didn't like was the beginning of the movie.  For a law enforcement officer to do what he did at the beginning of the movie after discovering the carnage, it just left me wondering just what was going on.  I don't want to tell you what happened as I hate reviews with spoilers on but this one just puzzled me.  In all honesty, it left me wondering if something had been cut during editing.

All in all, while this isn't going to set the horror world on fire this is still a well thought out psychological thriller with a supernatural / haunted house feeling to it.  I wouldn't call it a full blown horror movie but don't dismiss it because of that.  Also don't dismiss it because of it's association with The Asylum, the well known Ed Wood of the producing world.  This is a well made release by their standards and I, for one, enjoyed it.