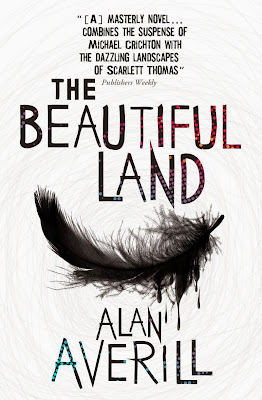 Takahiro O’Leary has a very special job working for the Axon Corporation as an explorer of parallel timelines—as many and as varied as anyone could imagine. A great gig—until information he brought back gave Axon the means to maximize profits by changing the past, present, and future of this world.

If Axon succeeds, Tak will lose Samira Moheb, the woman he has loved since high school—because her future will cease to exist. A veteran of the Iraq War suffering from post-traumatic stress disorder, Samira can barely function in her everyday life, much less deal with Tak’s ravings of multiple realities. The only way to save her is for Tak to use the time travel device he “borrowed” to transport them both to an alternate timeline.

But what neither Tak nor Axon knows is that the actual inventor of the device is searching for a timeline called the Beautiful Land—and he intends to destroy every other possible present and future to find it.

The switch is thrown, and reality begins to warp—horribly. And Tak realizes that to save Sam, he must save the entire world.

I'd been looking forward to reading Alan Averill's debut novel for a long time and even though it has sat on my shelf for a month or so, real life sadly got in the way and I've only just gotten around to reading it.  Now that begs the question, was it worth the wait?

With one of the weirdest yet most effective opening lines that I have read in a long time, this book is incredibly well written by Averill.  The flow of his prose really drags you in to the story and the lives of the characters themselves.  The easy flowing nature of the writing also will mean you will lose quite a lot of time to this book because of the fact that you'll be halfway through the book in no time.  With short chapters and great pacing, Averill has created a book that you won't want to put down.

However, there was one problem with the book and that's the fact that there were a few plot points and twists that were way too convenient and that took me out of the story a couple of times.  That said, it didn't ruin the story for me in the slightest but it did prove to be a little distracting when it happened.

The characters were, for the most part, well rounded and interesting yet there were a few characters here and there that just seemed to be there to make up the numbers.  That wasn't the case with the two main characters however,  in fact quite the opposite.  They were fully fleshed out and really had me willing them on to make everything right between them and it's been a long time since a character in a book has had me doing that.

For a debut novel, this is a very good attempt at entering the novel world.  Averill really has a way with words and that shows with this time traveling story.  That said it's more traveling to parallel universes than time traveling  but I'm picking hairs there.  This fast paced and well written 'time traveling romance' really hooked me in and had me wanting to find out what was going to happen next.

Definitely a novel that is well worth picking up for the science fiction fans out there and also for the fans of a good but darkly humorous romance.