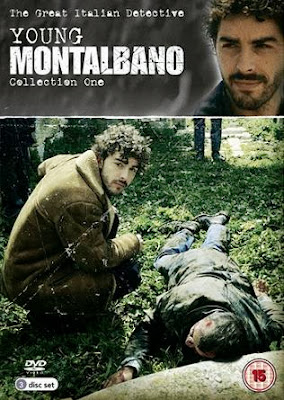 Exhausted by the neverending hillsides of his rural Sicilian beat, the Deputy Inspector - in the midst of investigating a murder - finds himself promoted to Inspector and dispatched to his childhood home of Vigata.

There he will be called upon to take control of the local police station and gradually build his team with both Fazio Senior and Fazio Junior, Domenico 'Mimi' Augello and the young and exceedingly eager Officer Catarella. Along the way he'll discover the simple dining pleasures of Calogero's, and the unexpected passions that will guide him into the waiting - always waiting - arms of Livia.

I'm not all that familiar with the Inspector Montalbano  stories so when it was announced that there would be a spin off looking at the beginnings of the character, I wasn't really sure what to make of it.

Once I put it in the DVD player to watch the series,  I was struck the most by the pacing.  If you have seen a series such as 'Inspector Morse' or that sort of show, then you'd know what to really expect pacing wise.

The episodes here have some great stories to them and have some absolutely superb twists and turns.  As you would expect, this Italian series does have a lot of scenes revolve around food but that's pretty much the norm for Italy in general not just the series itself.  I loved how the food brought all the characters together throughout the episodes.  It was almost as if it was the glue that held the series together so to speak.

Twists and turns wise, while it's not up to the quality of other foreign language series such as 'The Killing', there are still some great turns in the episodes.  However, one of the main problems with the series does stem with the twists and turns.  While the pacing was quite slow at some points, the sheer speed of the dialogue had me struggling to keep up at some points.  It got to the point in the show where sometimes I had to pause the action on the screen to keep up with what they were saying about the crime.

The performances here range from good to functional.  There's comedic relief in the shape of a cop who works the switchboard.  Those scenes range from being funny to actually being groan worthy and that's a shame because it brings the action to a  halt at times.

The rest of the performances are better but this is definitely Michele Riondino's show.  His portrayal of Montalbano exudes equal parts bitterness and pride in his work.  In fact, in some scenes, it comes across as a bit of an Italian version of 'Inspector Morse', who was played by John Thaw.  It was a very impressive performance yet at times it felt at odds with the other characters who were very hit and miss.  That's most evident in the portrayal of Montalbano's girlfriend, who at  one point seemed meek yet the very next minute came across as an incredibly angry woman.

All in all, I was a bit disappointed by the series.  The stories are good and the portrayal of Montalbano is very well done yet the other performances are so hit and miss and the dialogue so incredibly fast that it was sometimes so hard to keep up that it would take you out of the episode.  One just for the diehard fans out there.

'Young Montalbano' is available to buy from October 14th
Posted by Pat Scattergood at 13:34