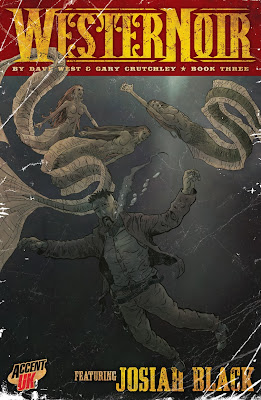 WesterNoir is a mini-series that mixes horror and western genres to tell the tale of Josiah Black, a man who has seen, and done, much in his life but nothing that has prepared him for what is to come.

Issue 3 sees Josiah fall in and out of love on the Mississippi. Oh yes, there's Mermaids as well.


After the fantastic first two issues of this series hit my reading pile, I flew through them with  ease.  The intelligent yet exciting writing hooked me in and I read them from cover to cover.

Book three of the series keeps that momentum up and even adds to it by creating a story that gripped me all the way through as well as being heartbreaking too.  The flow of the story seemed, at first, to be much more gentle and easy going than the first two books.  Then you hit the twist in the final third and that leaves a hell of a lot of possible stories for the fourth book.  There are so many ways that Black go from here and I can't wait to see where they are going to take the character next.

One of the things that I liked the most is that when you hit the end of the story, you just know there are going to be major ramifications for Josiah Black yet at the same time we saw another side of the character.  The 'enemy' here wasn't the stereotypical 'monster' that you would normally get in a title like this.  Instead, despite the bad things that they did, come across as a bit sympathetic.  I liked that touch because of the fact that it then in turn brought out a new side to Josiah Black.  He as still as much of a bad ass as he was in the first two books but we get to see a more emotional side to him and also get to hear a little bit more of his back story too.  It was quite to see another layer added to the character.

Art wise, once again, Crutchley is absolutely spot on with his art work.  Here he really seems to bring his 'a game' with the art by not going for an all guns blazing style of art work.  In fact, it's quite a subtle issue and that's shown here by the art as well.  When you do get to the part of the issue with the 'bang for your buck' so to speak, it does a good job of being shocking by showing you the action in few panels instead of dragging it out and that really comes across as being brilliantly effective.

'WesterNoir' is one of those books that really goes from strength to strength.  This story may have been more subtle than the first two books but I actually think that this was by far the best of the three that I have read so far.  If you haven't started to read this series then why not?  You are really missing out on a very well written and illustrated series that just gets better and better.

Click here to browse the Accent UK Catalogue!
Posted by Pat Scattergood at 15:21