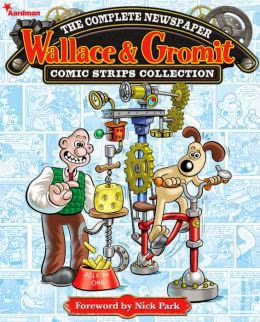 Collected together - for the first time ever - this book contains over 300 editions of the Wallace & Gromit daily comic strip which originally appeared in The Sun newspaper, plus a foreword by Nick Park.

With more inventions, gags and jokes than you can shake a Supa-Dupa-Cuppa 6000 at - or a Shredder-o-Matic 3000 - the Wallace & Gromit Collection will have you laughing from your early morning cuppa right up to your late night snack of cheese and crackers.

The characters of 'Wallace & Gromit' have been a favorite duo of many people for a long time now so it was only a matter of time before they got their own comic book strip.

That's when the British paper The Sun started to published a daily strip featuring the worlds favorite pair of hapless inventors.  Each mini adventure featuring one of their inventions would run for 6 days and have a plethora of puns, jokes and mishaps.

The pair are known for their bad but endearing puns and these mini stories are no different.  For a story that would only be 6 sets of 3 panels to have so many jokes and puns without feeling cluttered just shows how well the writers know these popular characters.

Art wise, it's not going to set the world alight but at the same time, it completely suits the 'Wallace & Gromit' universe.  The artists really do a fantastic job of recreating their facial expressions and manage to create little snippets of their lives that wouldn't feel out of place in one of their shorts or their movie.

The foreword by their creator Nick Park was a really nice touch in that it really show just how much he loves his creations and how proud of their popularity he is.

All in all, if you are a 'Wallace & Gromit' fan then you really should get this to add to your collection.  It most definitely stands next to their adventures and creates such a sense of fun and hilarity that some of the strips honestly had me howling with laughter.  If you're not a fan of theirs however, this probably won't change your mind about them in all honesty.  Like I said before, a good purchase for fans of the hapless inventors.