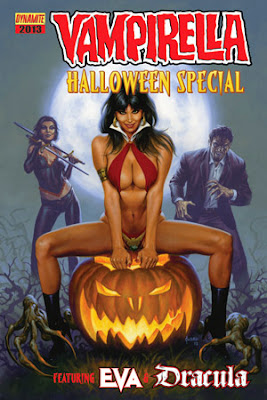 Vampirella once again joins forces with Dracula and Eva in order to confront a Doomsday Cult intent on releasing one of the Ancient Ones back upon the Earth.

The trio, empowered from their previous successes, will confront these evil forces head on!

These three warriors race from threat to threat in order to stop the apocalypse but will learn that even their immense power may not be enough.

Whether they accept it or not, some battles cannot be won...


I have to admit that I have never been that big a fan of the Vampirella character.  I find her adventures quite hit and miss in places but normally the special issues featuring the character that Dynamite put out are normally pretty good one shot stories.

Here Vampirella teams up with Dracula and his daughter, Eva, to bring down a dangerous coven of witches that want to bring about the end of the world.  Don't they always?

While the story itself isn't the most original in the comic book world, the writing  is a crisp pace and has some pretty good twists and turns.  I did like the mini side story of the father and the little girl wanting to get to America to get a better life for themselves.  In fact, I would have liked to have seen a little bit more of the two of them but there's only so much story that you can fit in to a 34 page issue.

Vampirella's adventure as part of a trio wanting to bring down the witches is exciting but the ending felt a little off.  It felt like they'd written the characters in to corner and went for the route they ended up with because they had nothing else to put there, that or they ran out of space for a better ending.  It didn't ruin the story for me but it just felt a little bit like a missed opportunity.  The story was building up to this massive ending only for it to not happen and that's a real shame.

Art wise this issue doesn't really jump out at me at all but neither was the art bad either.  The action scenes however was fantastically drawn by  Dietrich Smith and really hooked me in to the lead up to the final third of the story.  I know that Vampirella's costume is iconic but there are times when she's drawn that it just looks a bit stereotypical in that they make her 't & a' more a part of the story than the action itself and that happened a couple of times here.

The cover here is a bit cliched, hence the score, but it's drawn well and to be honest, if you already read the Vampirella comic books then the cover pretty caters to that crowd.

All in all, even to a non fan such as myself, I did enjoy this  issue.  The ending let it down a bit as did a couple of panels that seemed to focus more on her butt sticking  out and her boob's taking front and center stage as opposed to the fight she was having but it's still worth picking up.  It hasn't made me in to a Vampirella fan but it was still a pretty good tale.