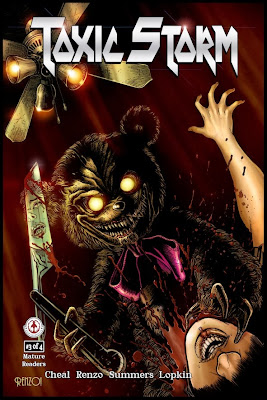 Demons.  Jewels.  Murder.  It's all here in the third issue of Toxic Storm, written by Adam Cheal.  Will Fontana and his daughter survive their confrontation with a maniacal cop using an experimental suit?

The first two issues of the 'Toxic Storm' comic book have been absolutely superb, straddling the lines between 1980's style horror and balls to the wall action superbly.

I was a little worried that the momentum might not last as the exciting writing and visceral art work had set the bar very high.  Well, this issue raises that bar even more.

We really do have a bit of everything, including the ending of the confrontation that befalls Fontana.  One of the things that I like about the writing is the fact that Cheal manages to keep the different stories running side by side without it feeling cluttered or disjointed  in the slightest.  In fact,  he seems to have the knack for being able to choose exactly when to switch between them.

One of the parts of the story that grows in this issue is the introduction of a 'bad ass demon' as one of my friends described it.  I loved the confrontation there and the glimpse in to the life of the tribe that is discovered there from the look at their rituals, including a sacrifice, and the threat of the demon returning to get his stone back.  I really can't wait to see where that side of things is going and it was great to see another layer added on to the character.

Also the story takes a truly bizarre turn when we witness the descent in to pure and unadulterated madness of one of the characters that takes the form of him talking to a stuffed teddy who then proceeds to goad him and encourage him to rape and murder.

Art wise, the comic just goes from strength to strength.  Rodriguez is fast becoming one of my favorite artists to see and this issue is no different.  He really does a great job of showing the brutality in this issue without using melodramatic facial expressions.  Instead, he uses short, sharp jolts of action to juxtapose the violence and brutal nature of the story.

'Toxic Storm' is definitely a series that just seems to go from strength to strength and improves with each issue but that begs one question.  How the Hell are they going to top this one in the fourth issue?

For more information on the comic and the team please go to their website that can be found here!
Posted by Pat Scattergood at 07:59