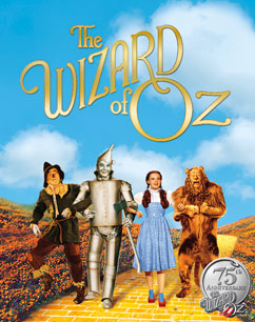 Written By Beth Bracken
Adapted From the Movie Screenplay By Noel Langley, Florence Ryerson and Edgar Allan Woolf
Screenplay Based on the Novel By L. Frank Baum

Film stills and original dialogue from the beloved movie The Wizard of Oz tell the tale of a young girl named Dorothy who flies over the rainbow with her dog, Toto, befriends a Tin Man, a Scarecrow, and a Lion on a yellow brick road to the Emerald City, and defeats a Wicked Witch before meeting a Wizard and learning that there's no place like home.

*The 75th anniversary of The Wizard of Oz
*3D re-mastering of the film for DVD/Blu-ray release in Fall 2013
*Created using film stills, this picture book is a great introduction to the movie
*The Wizard of Oz movie facts:
- Over 11 million DVDs sold to-date
- The film will be re-released in Fall 2013
- The film was Nominated for 6 Academy Awards and won 2
- The film was ranked #1 on the American Film Institute's list of "100 Greatest Fantasy Films of All Time"


The Wizard of Oz is a movie that  I have loved since I was a kid and have then passed that love on to my little lad, who is 4.

When I saw that there was going to be a book for children his age that told the legendary story using stills from the movie itself, I literally jumped at the chance to read it to him and review it for the site and I most definitely wasn't disappointed.

Beth Bracken has done an absolutely brilliant job of bringing the charm, the fun and the magic of the movie itself in to his book and it's laid out so well that it's a positively gorgeous book to share with your little ones.  The pictures and the great choices of fonts really work together to make this a book that will more than hold your child's attention for the entire story.  In fact, when I read this to my little lad, he was hooked from the very first page and wanted me to read it again as soon as I had finished.

I haven't rated the cover due to it being a photograph of the cast from the movie but it just suits the book perfectly because it has a nice classic look to it and that really does the book itself justice.

If you are looking for a classic story that will grip the little ones then look no further.  This is a well crafted version of an old favorite that more than deserves to be in a families collection.