The Last of Us: American Dreams Graphic Novel Review 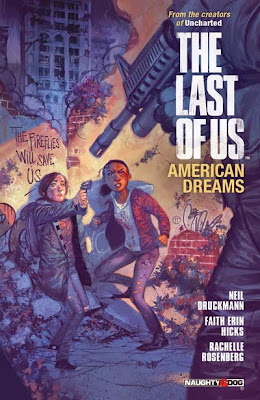 Naughty Dog creative director Neil Druckmann and rising comics star Faith Erin Hicks team up for the comics-exclusive first chapter of the wildly anticipated new game, The Last of Us!

Nineteen years ago, a parasitic fungal outbreak killed the majority of the world's population, forcing survivors into a handful of quarantine zones.

Thirteen-year-old Ellie has grown up in this violent, post pandemic world, and her disrespect for the military authority running her boarding school earns her new enemies, a new friend in fellow rebel Riley, and her first trip into the outside world, where she is confronted with a dangerous insurgent group — and with the monstrous victims of infection!


As a fan of the game 'The Last of Us' I was massively looking forward to getting to read this four issue mini series.  The idea of getting to see some of the back story that was only hinted at during the game really excited me but would the story itself live up to that?

That's a resounding no.

What we have here is a dull and lifeless cash in that doesn't really add anything at all to the happenings in the game and if I'm completely honest, actually really made me start to hate the character of Ellie.  In the game, she's seen as vulnerable yet a strong willed young lady but here, she's nothing like that at all.  In fact, quite the opposite.  She's massively unlikeable and I ended up reading through the story wanting something to happen to her just to shut her up.  All she seemed to do was bitch and cuss.

Another thing that really bugged me was that while this is a prequel so to speak, the parts that linked to the game itself felt rather forced and strained.

Art wise, Hicks has a reputation that had me really eager to see her art here and see how she would link her art style to the story.  While the art is good, nothing about it really jumped out at me.  In fact, when I had finished the book itself,  I couldn't really remember all that much about the art and that's a real shame because Hicks is a great artist.  It just felt like there wasn't much room for her work to come alive.

All in all, unless you absolutely have to have everything to do with 'The Last of Us' then I would give this a miss. The story didn't grip me at all and the art just didn't come alive.  In fact, these issues made me start to hate the character of Ellie and I'm pretty sure that wasn't the result they wanted from the issues.