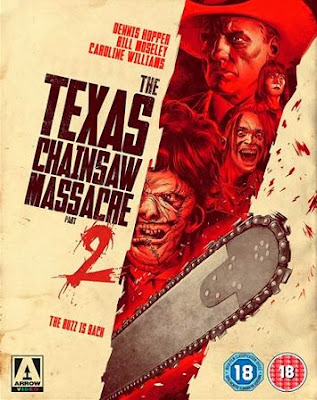 
In 1974, Tobe Hooper quite literally changed the face of horror with his landmark film The Texas Chain Saw Massacre. Although the hulking Leatherface and his trusty power tool left an indelible mark upon the cinematic landscape, it wouldn’t be until 1986 that the buzz came back… in The Texas Chainsaw Massacre 2!

Relocating the cannibalistic Sawyer clan to a cavernous, labyrinthine dwelling beneath an amusement park, Hooper’s deliciously demented sequel sees Leatherface and Co. continue their murderous exploits afresh. This time around, local DJ Stretch runs afoul of the Sawyers when she gets mixed up in the brutal slaying of two youngsters. Meanwhile Lieutenant ‘Lefty’ Enright is hell-bent on avenging the murder of his nephew Franklin who perished in the original massacre.

A cult classic in its own right, The Texas Chainsaw Massacre 2 serves up a heady blend of gratuitous gore, socio-political critique and jet-black humour – whilst Dennis Hopper’s unhinged turn as Lefty needs to be seen to be believed! Whichever way you skin it, Leatherface’s second cinematic outing is an uncompromisingly delirious vision from one of the masters of horror.

When the original 'Texas Chainsaw Massacre' was released it went down in legend as one of the most nerve wracking and scary horror movies ever made.  However it wasn't until 1986 that a sequel would turn up but would it match that level of the original.

Well, back when it was released, critics took one gigantic dump on the movie.  In their eyes, it completely destroyed the aura of the original.  With 27 years now passed since then, Arrow Films have put together one hell of a set to bring the movie back to the forefront of horror movie fans collections.

The story itself is nothing like the original.  In fact, I would even go so far as to say as it comes across as a gory and incredibly over the top yet darkly comic  look at the state of horror movies back in the 80's.  There were so many little nods and digs at other movies and some of the performances really do have to be seen to be believed.

In places, the movie takes a very strange detour in to pure and utter insanity, which is one of the things that I really liked the most about the movie.  It may be weird, it may be completely over the top but it is sure as Hell never boring.

Performance wise, it's what you would expect from an 80's horror movie but with one massive exception.  Dennis Hopper.  He gives one of the most manic and completely unhinged performances that I have ever seen in a movie, not just a horror movie.  You honestly believe that he is totally bat crap crazy.  The idea of someone wanting revenge for losing someone close to them isn't a new one in the slightest but Hopper plays it so well that you can't take your eyes away from them because it honestly feels like the grief and the need for revenge has full on eaten the characters sanity.

The transfer for the movie itself is absolutely brilliant.  It's almost as if it's a movie released today not one that was first released in 1986 so kudos to whoever did the transferring job.

However that's not where the set raises from being good to being essential.  There are a positive treasure trove of goodies for the horror fan and specifically for the fans of the 'Texas Chainsaw Massacre' movies themselves.  In fact, if you are a fan, then you are in for a great time going through all the things that are included in this 3 disc set.  Arrow Films have done a mind blowing job on making this release of a criminally under rated horror classic stand out from the crowd and have full on jammed as much on to the discs as they possibly can.

The real highlight for me as a fan of Tobe Hooper, is the inclusion of two of Hooper's early movies.  One a short and one his first directorial debut.  Both have been cleaned up and transferred on to home video for the first ever time.

In all honesty, this is an absolutely essential purchase for horror fans.  There is so much here that you could spend a very long time going through all the goodies without getting bored.  Like I said earlier, it's a positive treasure trove of special features and surprises so what are you waiting for?