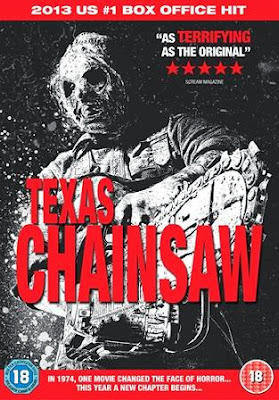 Texas Chainsaw, the US #1 box office hit, picks up directly where the terrifying 1974 Texas Chainsaw Massacre ended, with the repercussions of Leatherface's shocking slayings. In the aftermath of Tobe Hooper's classic, the townspeople take dramatic action against the Sawyer family. They had long suspected the family were responsible for several mysterious disappearances and had their suspicions finally confirmed when a young woman escaped the house. Word of the murders quickly spread, and a vigilante mob of enraged locals surrounded the Sawyer stronghold, burning it to the ground and killing every last member of the family - or so they thought...

I have to admit that I appear to be in the minority when I say that I actually enjoyed this movie.

Is it an original horror movie?  Good lord no.  Is it as bad as people have made it out to be?  No, not by far.

What we do have is a movie that explodes in to action at the beginning, takes it's time to going when introducing the characters but then ramps it up to fifth gear in the final third.

There have been many reviews lambasting all different sections of the movie and I have to admit that some of the complaints are correct and well deserved.  The whole messed up timeline of the movie did really bug the hell out of me in that the original movie was set in the 70's yet this one was set now but with things happening that happened straight after the first movie.  That would make the characters massively older than they are depicted here.  I know that with most horror movies you have to suspend your belief and for the most part, I'm cool with that, yet the timing of the murders etc that happen in the movie just threw me off a bit.

The other thing that bugged me is that a lot of the characters that end up being chainsaw fodder for Leatherface are largely unlikeable and interchangeable.  In fact, other than Heather, I wouldn't be able to tell you the names of the others without looking them up.

Story wise, the rest of the movie is fine.  It's not original or shockingly new with it's ideas but for the most part, it works.  It's the sort of movie where you go in to it knowing exactly what you are going to get when you watch it but at least this installment in the series tries to do something new with the characters and the mythology of the movies.  Not all of the ideas are successful.

One of the things that fans complained the most about is that the writing seems to make you want to feel sorry for Leatherface himself.  I don't think it does.  It shows a deranged killer taking revenge on people that were just as bad and messed up as he was.  I don't have a problem with that development of the character because it shows that he's not averse to that kind of thing happening to him either.

Special features wise, this is a superb set with some great features.  There are three commentaries, although the one with the director is actually boring in places.  The one with Tobe Hooper is a good one but I wish that Hooper would have spoken a little bit more but it's the alumni commentary that's by far the best of the three.  The featurettes are well made and very interesting as well, especially the one about how much work they put in to making the house look exactly like the house in the original one. I was very impressed with how close they actually got the newer one.

All in all, while not an original horror movie in the slightest, it's still nowhere near as bad as some of the reviews have made it out to be.  As a long time fan of the 'Texas Chainsaw Massacre' series of movies, I actually enjoyed the fact that they tried something different with this one.  The timeline of the movie is messed up, which took me out of the movie a bit, but other than that it did exactly what it set out to do so it's still worth a look at the very least.

Posted by Pat Scattergood at 16:00