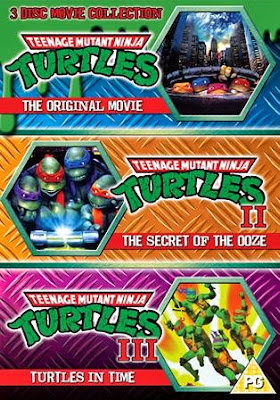 TMNT -  They're mean, green and on the screen.

Michelangelo, Raphael, Donatello and Leonardo - those pizza-munching, wise-cracking, butt-kicking heroes in a half-shell - are back in a fully restored and totally uncut version of the original movie!

Follow the antics of the Ninjitsu-trained super-reptiles as they fight against a gang of deadly assassins and their wicked leader, The Shredder, who is hell-bent on world domination...

TMNT 2 -  The turtles find out where the Ooze, the substance which made them mutate, came from. Unfortunately Shredder learns about it too and will do anything to get his hands on it...

TMNT 3 -  Everybody's favorite giant kung-fu kicking turtles travel through time and space to feudal Japan to rescue their plucky sidekick April, when a golden sword accidentally causes her to switch places with a rebellious samurai...

For the first time since they were made, the original three Turtles movies are available all together as a superbly put together box set.

I hadn't seen the first movie for a very long time and I'd forgotten how dark the movie actually was.  It had quite a Tim Burton's 'Batman' feel to it and while it was exactly Earth shattering in it's quality, it was still a really enjoyable version of the characters created by Kevin Eastman and Peter Laird.

For the second movie, we have a new April O'Neil in the shape of Paige Turco.  I think that was a bit of an improvement as her portrayal made the movie version of the character a little more interesting.  The movie itself is a bit lighter on the action side of things and ups the comedy a little more but for the most part, it's a fairly good movie.  The sort of film that you have on in the background.  It's nothing spectacular but at the same time it's not bad either.

For the third and final movie in the trilogy, we enter the world of time travel.  While it's an OK story, it just felt that they were grasping at straws a little bit like they've exhausted all the good ideas in the first two movies and stuck the first story that came in to their heads for this one.  The performances aren't awful but at the same time, they felt like they were just going through the motions.  Another problem with the movie is that the Henson company wasn't involved with the making of this movie and therefore the turtles and Splinter look a lot different and less effective than in the first two movies.

The transfer for the sound and the picture for these movies are really well done.  They do struggle a little with the really dark scenes in the first two movies but I've seen much worse transfers.  The sound transfer for the movies is very well done.  You can really hear the sound crystal clear and that's the most evident with the background sounds, especially in the city scenes.

All in all, while the movies aren't the best comic book adaptations that I've ever seen, I still think they stand up very well today.  The third one let's the trilogy down a little by being a bit too heavy on the comedic side of things but the first two movies are superb.  The first movie is by far the best of the three and is also the darkest and closest in tone to the original comic book series.

If you are a 'Turtles' fan who was disappointed in the CGI movie or are horrified at the fact that the king of the bombastic aka Michael Bay is going to making a reboot then you really should pick these ones up instead.  The transfer has done a really good job of cleaning up the movies both visually and audio wise too so this is a set that's well worth picking up.

'Teenage Mutant Ninja Turtles: The Movie Collection' is available to buy on DVD and Blu-ray on October 28th!

So be ready to 'shell' out your money for this one!

Posted by Pat Scattergood at 13:10