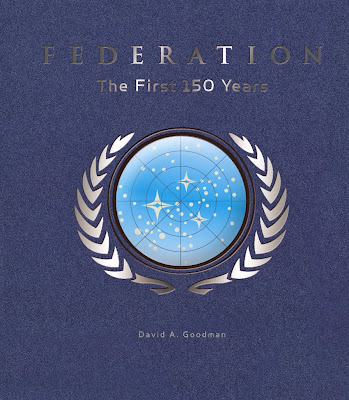 Assembled as a Special Exhibit on Memory Alpha, Federation: The First 150 Years celebrates the 150th anniversary of the founding of the United Federation of Planets.

This unprecedented illustrated volume chronicles the pivotal era leading up to Humankind's First Contact with Vulcan in 2063, the Romulan War in 2154, the creation of the Federation in 2161, and the 150 years of the intergalactic democracy up until the year 2311.

Meticulously researched, this account covers a multitude of alien species, decisive battles, and the technology that made the Age of Exploration possible.

It includes field sketches, illustrations, and reproductions of historic pieces of art from across the Galaxy, along with over fifty excerpts from key Federation documents and correspondence, Starfleet records, and intergalactic intelligence..

'Federation: The First 150 Years' truly uncovers the quest for man to boldly go...

After reading the movie tie 'history' book called 'The Book of Sith', I had massively high hopes for this one.  As the 'Star Wars' book blew me away, I couldn't possibly imagine that this one could come close to  matching the quality of that.

Well, I was completely wrong.

As a long time 'Trekkie', or 'Trekker' depending on which you prefer, I started to read this as soon as it landed on my doormat and I was not disappointed.

For a fan such as myself, this book is an absolute treasure trove of information about some of the most important moments in 'Star Trek' history, most of which have only been spoken about.  The writing here really shows a love for the source material and Goodman's writing comes across as if this book were a real life history textbook.  The key moments in the shows history are all accounted for, my favourite being the part about 'First Contact'.  Getting to read about the characters that have played such a part in the world created by Gene Roddenberry was fantastic.  Because the 'First Contact' movie is one of my favourite ones out of the 'Next Generation' movies, I couldn't help but imagine those parts with the actors that played them in my head.

The Starfleet records, Federation documents etc, are superb.  They really do look and feel like something that would really exist in the real world.  There were also lots of little nods for science fiction fans as well.  One of the ones that made me laugh the most was the fact that one of the reporters that had written in the book was named Sarah Jane Smith, just like the one played by Elisabeth Sladen in the 'Doctor Who' series.  Whether or not that was intentional I have no idea but it made me smile.

The illustrations here are absolutely gorgeous and I would even say that a lot of them are worth getting the book for on their own.  Some of them look so authentic that it was at times hard to realise that this was a tie in book for a television series and not an actual text book.

If you are a science fiction fan or a 'Star Trek' fan then this is most definitely  a must have purchase.  I honestly can't recommend it enough.  Not only is it interesting and will hook the fan right in, there's so much here that you can read it again and again, noticing something new each time.