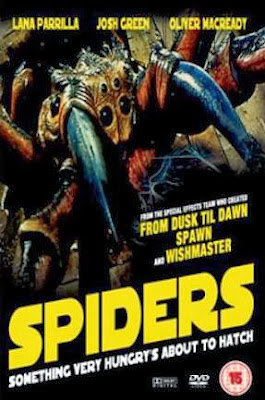 
The future of the human race hangs by a thread!

Assigned to cover the space shuttle landing, college newspaper reporter Marci and her colleagues head out to a restricted area of the desert, where they are also attempting to prove the existence of aliens they believe have landed there.

When the shuttle crash lands nearby they sneak into headquarters and stumble upon a secret, unauthorized experiment that has gone wrong: a spider on board that was injected with alien DNA is now on the loose...and each time it kills, it gets bigger and hungrier!

The story is relatively simple and well trodden ground. There's been a secret experiment involving alien DNA on a normal creature, this time a spider, and it's gone wrong. Then the creature escapes and starts killing many people.

Been there, done that.

Yet strangely this movie is quite enjoyable in a perverse kind of way. The acting ranges from good to more wooden than Megan Fox, yet it somehow adds to the charm of the movie.  One of the things that I really liked was the fact that there were some great little digs at the cliches that are normally in these sorts of movies and even makes fun of itself on a couple of moments.  I've always been a fan of movies that can do that while still entertaining me at the same time.

Lana Parrilla, yes the Lana Parrilla from 'Once Upon A Time',  manages to be the most memorable of the cast giving an action heroine performance that manages to be like a low budget Sigourney Weaver. I couldn't help but find myself rooting for her character and she also gets some of the best, although I mean best in a so cheesy they're kind of fun way, lines.

The special effects aren't great by any stretch of the imagination but I have seen a lot worse. Cough cough mega piranha cough cough.  There are parts of the movie where the effects are serviceable yet there are other scenes where they're completely hilarious.  For example the webs are thin rope and if you look closely, you can see the knots holding them all together.

All in all, while not a good movie in the traditional sense, it's still strangely enjoyable if you can switch your brain off and don't expect a movie of blockbuster special effects.
Movie 6/10
Picture 7/10
Sound 7/10
Special Features N/A
Overall 20/30